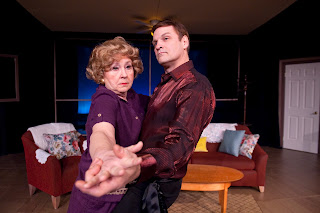 Sharry O’Hare and Micheal O’Hara are charming in “Six Dance Lessons in Six Weeks” at Tacoma Little Theatre, and the play is a delight.

If words like “charming” and “delightful” connote lightweight, do not be fooled; this play is anything but light. Major social, religious, psychological and political issues are brought into scrutiny in the witty dialogue between Lily Harrison (O’Hare) and Michael Minetti (O’Hara).

I cannot say what these issues are without spoiling plot surprises. Suffice it to say that reality lurks underneath the sweet comedy of Lily and Michael’s relationship.

Lily is an old woman who hires Michael to teach her ballroom dancing — the six lessons of the title. Michael is a much younger man, and their backgrounds, beliefs and way of life are as different, and in surprising ways as similar, as antonyms and synonyms. 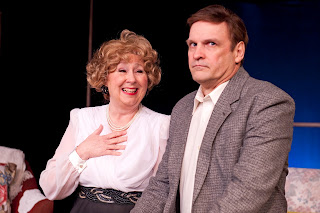 From their initial meeting they lie to each other, and as their stories unfurl in lesson after lesson the lies are confessed or discovered and the layers of their lives are peeled away, and it is all done with acerbic wit.
Presenting such heavy material in a ways that are funny and making such complex characters both believable and loveable requires two things: an intelligent and inventive script, and a pair of actors who are not only seasoned professionals but who can play off one another as lovers can. Richard Alfieri’s script and the casting of O’Hare and O’Hara fulfill both conditions.

These two actors are married to each other, and each of them has long and impressive theatrical credentials. This is the third two-person show they have done together, the others being “I Do! I Do!” and “Love Letters.” And this is the second time they’ve performed “Six Dance Lessons…”

The play is presented in two acts with seven scenes, each of the first six scenes being a separate lesson — swing, tango, Viennese waltz, foxtrot, cha-cha, and contemporary dance — and the seventh scene being a “bonus lesson.” Each scene requires a costume change because Michael insists on dressing the part for each dance. The costumes by Michele Graves range from ludicrous to elegant. The downside to the many costume changes is the long breaks required between scenes. These are not effectively filled by music and projected images. Opening night the music needed to be louder, and while many of the projected images were dark they were lit enough to show stagehands working on the set each time. I’m not sure what could have been done to better cover the time between scenes, but something better was needed.

I was slightly disappointed in Blake York’s set, which was not up to his usual excellence. I did, however, like the drop ceiling and ceiling fan and some of the furniture. Too bad they had to roll up the carpet in every scene and a stagehand had to come out and unroll it during every scene change, a distraction that did not.

O’Hara, an excellent actor, seemed slightly stilted in the first two scenes, which could be chalked up to playing a character who was pretending to be something he was not. After that he eased into his character much more naturally. O’Hare was fully into her character, natural and believable, from the moment she stepped on stage. The writing also seemed slightly contrived in the first few scenes, but by the time they got halfway through the tango every joke and every surprising plot point flowed naturally from the characters and situations.

The play is billed as a comedy, but it is much more than just funny bits. Ultimately, it is a love story. Not a romantic love story but the far deeper and more endearing love story between two people who grudgingly become friends. Lily and Michael start off prickly and at each other’s throats, and their relationship ends up being more like that of best friends or like mother and son.

O’Hara and O’Hare are probably close in age, but they convincingly play people with an approximate 30-year difference in age. This is made possible by costuming, a couple of natural looking wigs and some outstanding acting.

I can’t imagine anyone going to this play and not walking away feeling better about themselves and the world they live in.