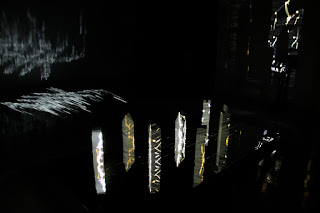 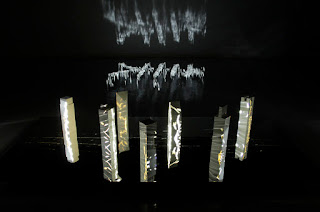 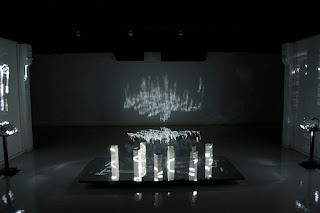 The latest show at Kittredge Gallery, University of Puget Sound, is a fascinating installation that may prove difficult to describe. I’ll do my best while suggesting that you see for yourself.

It is called Kūkai, and it is a collaborative project between digital media artist Robert Campbell and ceramic sculptor Yuki Nakamura, who previously worked together for an installation called Floating Plaster/City Motion, a multimedia installation comprising video, audio, and cast sculptures for the New Works Laboratory, a program between 911 Media Arts Center and the Henry Art Gallery at University of Washington in Seattle.

The current installation is all about light and sound — mostly light.

The gallery door is partially closed — open only a crack. And inside it is dark. Some visitors may think they are closed, but walk on in. Inside there are a few upright posts in the middle of the room, and projected on them or projected from inside of them (it’s impossible to tell which) are streaks of light like bolts of lightning that change from moment to moment. On two panels on either side are projected light images  and on another side there is what appears to be hundreds of little standing figures that move about in ever-changing patterns as if on a motorized turntable on the black floor. From my point of view I thought they were made of cut sheets of metal. But when I walked around to the side I saw that they are actually projected streaks of light on the floor. Other light images are projected on the back wall.

The whole thing is in constant fluctuation or movement as if dancing to some seductive but strange music that sounds alternately like pneumatic hammer-driven pylons or fireworks explosions. Or perhaps a composition by the love child of John Cage and Phillip Glass.
As I said, the whole thing is almost impossible to describe, but it is mesmerizing.

The press explains: “Kūkai is an extension of and elaboration on some of the revisited experimentations and ideas generated during (the artists’) six-month residency in 2006, and an installation at SOIL in 2012. The artists have noted: ‘We live directly across Puget Sound from one another — one on Vashon Island, the other in the Old Town district of Tacoma. Sea and sky are omnipresent in our daily imagery: as we watch the floating forms of ships, tankers, and drifting objects, we think of the sea between the Pacific Northwest and Japan, and the parts and pieces of homes washed away during Japan's recent tsunami which are floating toward these shores. The forms which we are reactivating are based on traditional Japanese wood joinery: forms that create bonds that hold parts together. We are basing our approach to combining our respective art forms on these general ideas.’ The installation is an immersive environment created using digital projection, porcelain, and Mylar. This project is supported in part by the Tacoma Artists Initiative Program.”

In the smaller back gallery there is an excellent but sparse exhibition of contemporary drawings that includes, among others, a still life by Alice Neel, a great drawing of a recumbent fat man by Jerome Witkin, and the wicked “Smirking Virgin” by Gerald Purdy.