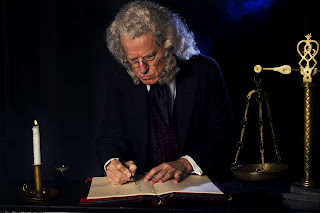 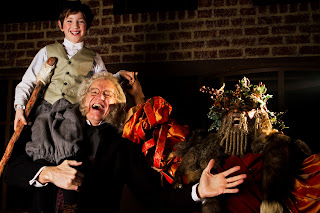 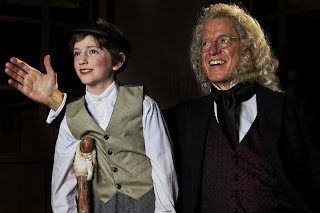 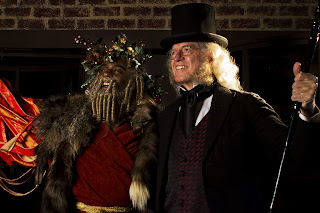 
Photos: from top, Michael E. Self as Ebenezer Scrooge, Nicholas Hayes as Tiny Tim with Scrooge and Geoffery Simmons as the Ghost of Christmas Presence, Tim and Scrooge, Ghost of Scrooge.

I swore I was not going to see any more Christmas shows this year. Especially not yet another version of “A Christmas Carol,” and yet I saw “Scrooge” at Capital Playhouse. And I’m glad I did.

This production of “Scrooge” is thoroughly professional in every aspect, from the sets, lighting and costumes to the directing and the music, both by Troy Arnold Fisher, and of course the performance by the entire cast from lead actor Michael E. Self as Ebenezer Scrooge to ensemble actors such as Nicholas Main and Jake Hoff who appear as Peter Cratchit, an urchin, and undertaker and “boy with sled.” It is theatrical in the extreme, with powerful special effects and exuberant performances. Even the wigs and the fake beards and moustaches some of the men wear are outstanding in a couple of ways: they reflect the styles of the times, and they help to transform actors such as Jerod Nace and Geoffery Simmons into a multiplicity of believable and sometimes hilariously absurd characters (witness the outsized moustache Simmons sports in the opening scene). It’s a rare thing when wig designs are credited in a performance program, but Michael Costain deserves the recognition.

More on costumes, sets, etc. later, but now on to the performances.
Nace – a veteran of many shows at Capital Playhouse, Tacoma Musical Playhouse, Lakewood Playhouse and others – turns in one of his finer performances in this show. He’s in fine voice on “I Hate People” and “Thank You Very Much.” He’s loveable as Tom Jenkins and switches to three other characters with ease.

Simmons, the only Equity actor in the cast, is a fabulous Ghost of Christmas Present. I haven’t seen him on a South Sound stage since his fabulous performance in “Sideshow” three years ago and “Ain’t Misbehavin’” in 2005, and it was great seeing him again. In this role he doesn’t get a chance to solo much, which is a shame, but he does get to strut his stuff with broad gestures and a marvelously booming laugh, and he imparts a brilliantly regal personality to the ghost.

Diane Lee Bozzo is great as the Ghost of Christmas Present. Her singing with Scrooge and others on the song “Happiness” is potent and lovely.

The other women in the cast – Christie Murphy, Rachelle Riehl, Erin Snodgrass and Gwen Haw – are all excellent, but the plum roles belong to the men: to Self, Simmons and Nace; to Patrick Wigren as Marley, young Scrooge and others; and to Nicholas Hayes as Tiny Tim.

Wigren, whom I took special note of in his fabulous performance as Rooster in “Annie” last year, is captivating as the ghost of Jacob Marley with his weird sideways walk while weighted down with chains, and he is convincing as the young Scrooge. My only regret is his amplified voice when playing Marley was too loud. The effect was great, but the volume was deafening. (I have been complaining for at least eight years that Capital Playhouse overdoes the volume. It’s not Wigren’s fault; it’s the fault of a theater that is too small to have the volume so loud.)

Hayes, a third grader in his first main stage performance at Capital Playhouse following performances with the company’s Kids at Play and Kids in Koncert, is charming as Tiny Tim, and his voice on the haunting “The Beautiful Day” is crystal clear.

Finally, there is Scrooge. Self is a consummate actor who brings the character to life and makes us hate his stinginess yet still enjoy his personality even before his famous transformation takes place. And his singing is really great. He has a strong voice that is deep and mellow with a hint of gravel and resonance. Self owns every scene he is in.

Now back to a few words about the designers and the tech crew. The set designed by Bruce Haasl and built by Haasl and technical director Dennis Kurtz beautifully captures the feel of mid-19th century London. The shop windows and the massive wrought iron gate and the huge clock that hovers over it are impressive. Three separate parts of the set revolve to change from street scenes to interior scenes and Scrooge’s heavy four-poster bed moves on and off stage and revolves and shakes, and there is lots of fog and dramatic lighting and sound (lighting by Matt Lawrence and sound by Tom Dakan). The costumes by Asa B. Thornton are outstanding. Marley’s costume and that of the Ghost of Christmas Present are deliciously elaborate and pretty much indescribable.

It’s a story that never gets old, and it is presented with panache and dramatic flair. I definitely recommend “Scrooge.”