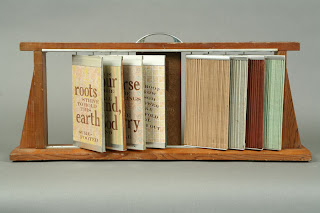 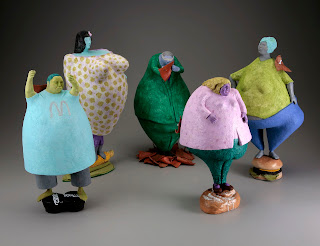 "Ingrained," a print on handmade paper by Jessica Spring
"Pin a Dorito on an American" by Lynn Di Nino

The Greater Tacoma Community Foundation Award is a big deal. Being nominated is an honor bestowed by one's peers, and being chosen as the award recipient is an even greater honor. The choices are made by a committee including Tacoma Arts Administrator Amy McBride; Jeremy Mangan, recipient of last year's award; Rock Hushka of the Tacoma Art Museum; local artist Susie Russell Hall and others. It's just about the biggest award granted to local artists. As such, it's a shame that it doesn't merit a major gallery or museum showing such as what used to be given to the Neddy Award nominees. As a matter of fact, since the Neddy has taken its show away from Tacoma Art Museum in favor of a Seattle venue, maybe the Foundation Award show could replace the Neddy at TAM.

Instead, it's a window show in the Chamber of Commerce building at Pacific and 11th. Not exactly the best way to show such honored work.

Spring is the founder of locally-based Springtide Press. Her piece for the Foundation Award, titled "Ingrained," is an art book created on handmade paper made from ancient Western red cedar logs and printed with poetry written by Spring. The pages hang from a display rack similar to those used by stores to display flooring.

Spring explains: "I found the original cedar shingle sales kit on antique row in Tacoma. I had seen it long before our trip to Yakima, and it came to mind pretty quickly after my idea and on a return visit I was really relieved to find it still there. I was determined to make my own paper for the piece, and had experimented a little with eastern arbor vitae. After some strange phone calls to local mills, I found Darwin. He's been working in the timber industry since he was a kid (and has less than 10 fingers to prove it). Darwin had some huge Western red cedar logs with bark - nearly two feet across. He pronounced these behemoths "adolescents" and used a huge scraping tool to peel off several sections I could load in the car. After soaking (them) I could remove the inner bark in strips, cook it for most of a day, then process in a blender. The resulting fiber made beautiful paper - some I used straight, some I mixed with abaca or recycled cotton paper - all of it dried pasted on my studio windows."

Spring wrote all the text except the W.B. Yates quote on the back of the piece. Unfortunately, in its present setting it is impossible to see all of the pages. I have seen only enough to get the impression that the text has to do with metaphors for our relationship with the forests and includes some clever word play.

Similar in content is Peter Serko's photograph "Only the Trees Remember," a beautiful, misty photo of almost invisible leafless trees and houses printed on aluminum with a strange green patina. It sweetly captures the essence of the land of the Pacific Northwest.

By contrast, Lynn Di Nino's "Pin a Dorito on an American" is a delightfully playful sculpture of five obese characters standing on the food they devour. It's like a tongue-in-cheek monument to the glories of junk food.

Also very enjoyable is Ellen Ito's take on a poster from the movie "Cool Hand Luke" printed in soft gray washes with bright red paint on a long scroll.

This show includes representative works from some of Tacoma's best artists. You owe it to yourself to see it, even if it means standing out in the rain and the cold. The window display is supposed to remain for an indefinite period of time. I was told it would be about three months.