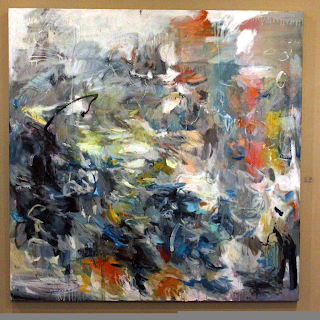 These cold paintings are hot

“HALF MOON”: Oil and encaustic by Judy Hintz Cox, currently on display at B2 Fine Art. Courtesy B2 Fine Art
Cold Fusion at B2 Fine Art is the second part of a two-part exhibition. The first part, Hot Fusion, was last summer. Hot summer, cold winter, and a few of the same artists: Scott J. Morgan, Judy Hintz Cox, Todd Clark and photographer Jeff. G. Mitchell.

All of the work is abstract in the classically modern style that epitomized American art in the 1940s and '50s. Don't look for anything radically new here, but you can expect to see fine art by fine artists who thoroughly understand the elements of painting.

Cox and Clark dominate the show with their large, exuberant paintings.

Cox is showing works in three distinct styles. There is a group of highly gestural abstractions with loosely brushed strokes on a stark white background; a series in a variation of this with slightly more controlled forms and a similar white background; and a third series that is also similar but much more highly controlled and almost minimal, with more solid shapes which formulate recognizable subject matter. There is one called "Practicing Leaving," for instance, that has a contour drawing of a penguin in it, one that has a few shapes that look like boulders stacked on a precipice, and yet another that has an animal shape and a box drawn in perspective as if hurling through space. These paintings are the least conventional works in the show. I appreciate their originality and their smart use of space and balance, but they're not as exciting as Cox's more painterly abstractions.

In terms of pure painterly energy the best of Cox's works are the ones with reddish-brown and ochre shapes on chalky white. The tenuous balance of open and closed spaces and the excitement of a variety of transparencies, drawing, dense layering and texture within closed shapes is very exciting. I'm tempted to say these are the best paintings in the show, but that would discount Clark's work, which is also excellent.

Clark is as eclectic as can be. He has mined the best of Abstract Expressionist art, stealing from the likes of Pollock, de Kooning, Mark Toby and Joan Mitchell and others. His "Solo" is like a Pollock in black and white but with brushstrokes instead of dripping. "Art Lesson" is a Joan Mitchell in tones of gray with accents in pink, blue and orange. Toby's famous "white painting" comes into play in his large painting called "Small Todd Meets Big Todd." The top two-thirds of this painting is a field of squiggles of paint in tones of gray with Toby-like white on top, and the bottom one-third is infused with some of the hottest reds and pinks I've ever seen. It's on fire!

Morgan's paintings are mostly small abstractions with organic shapes in muted colors. His one large painting, "VA" (65-inches square) is his best, due to its controlled push and pull between shapes.
Mitchell's photographs are close-ups of parts of buildings and airplanes that twist and soar through space. The forms look like they've been distorted as in a funhouse mirror, but they have not been manipulated in any way. These are strong industrial images.

Overall this is a warm and inviting show for cold winter days.