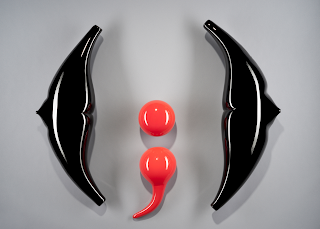 The problem with conceptual art is that it usually expresses a single idea, and once you get the idea there's not much left to look at. That is almost but not quite what happens with Parenthetically Speaking: It's Only a Figure of Speech, the new Museum of Glass exhibition of work by San Francisco-based artist Mildred Howard - known to MOG patrons as the artist who did the red glass house and pool full of red glass apples that was installed outdoors when the gallery first opened.

Like her earlier installation, Blackbird in a Red Sky (a.k.a. Fall of the Blood House). this show is very, very red. And very stark. The gallery walls are filled with 40 glass punctuation marks, proofreading symbols and musical notes, all in deep candy apple red and black and done in a Pop Art-minimalist fashion.

What can be more emphatic than a bright red exclamation point hanging on the wall? What more than a red semicolon inside a pair of curly brackets can cause you to stop in your tracks, if even for just a moment?

These works are attractive and intriguing in small ways. They make you wonder. The show, taken as a whole, can be viewed as a single statement conveying a single thought, or individual pieces can be viewed separately or in various groupings to convey other possible meanings. For example, ellipses lead the viewer around a corner and into the gallery as if the whole show is a follow-up to a partial statement. Along one wall there are opening and closing quotation marks with a lot of space in between - quoting nothing. And there are groupings of marks that if read out loud or mentally pronounced constitute little concrete poems. Noticing these things is fun. But the joke is ultimately on us because they don't say anything. Or maybe we just don't get it.

The works in this show were inspired by the poem "At the End" by Quincy Troupe. The poem uses punctuation as metaphor. A comma, a pause, perhaps to regroup; a period at the end, death or perhaps a new beginning. If Howard's glass punctuation marks are metaphors their meanings are less obvious. "Life is a series of questions," she says.  "As soon as you answer one, you're on to the next."

Are they a big joke? Do they relate to and add to the iconography of Pop artists the likes of Andy Warhol and Claes Oldenburg? Do they question the very meaning and purpose of art and life as did works of similar pseudo banality such as Duchamp's "Fountain" and Magritte's "Ceci ne'st pas un pipe"? Or are they just cute and playful and devoid of any greater meaning? Howard wants viewers to decide for themselves. I vote for cute and playful.

Also showing at MOG is a wonderful installation by Ingalena Klenell and Beth Lipman, Glimmering Gone. This wonderland of glass should be seen by everyone. The museum is also continuing with the very enjoyable kid's glass show, not to mention Fertile Ground: Recent Masterworks from the Visiting Artist Residency Program. Finally, check out a new group of photographs by Tacoman Peter Serko of the museum itself as seen in various seasons and lighting conditions and with varying installations from the museum's founding in 2006 until the present time.