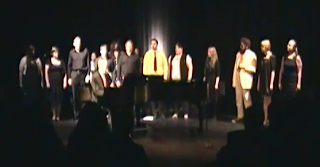 Chorus and guest soloists with Steve Schalchlin on piano
I witnessed something extraordinary at the New World Waking fundraiser concert for PFLAG-Olympia. Yes, of course, the whole concert was extraordinary – not just a musical concert and not just a theatrical experience, but something else new and indefinable. But that’s not what I’m talking about. I’m talking about lights of comprehension coming on.
At one point in the show the chorus members all stand up. Before the second show one of the chorus members suggested that they not stand together but one after another in a kind of random pattern as if each in his or her turn got the message of the song and was moved to stand. Witnessing that was not only a powerful theatrical moment, but it stood as a metaphor for the entire show and the process that went into bringing it together. 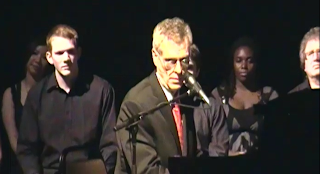 You see, none of the performers knew quite what they were going to do when they came together for the first time on the day before the first show. They knew that a singer/composer was going to come to Olympia and do a one-day workshop with them and then put on a show in the Black Box Theater at The Kenneth J. Minnaert Center for the Arts at South Puget Sound Community College. The composer, Steve Schalchlin, had emailed them some sheet music and told them to let him know if they wanted to solo and if so on which songs. They didn’t really have a clue as to what was going to happen when they first gathered together for the workshop.

I was there to witness it. Steve told them they were going to put on a show, and he started rehearsing them. I could see it in their eyes. They didn’t know what was expected of them, they didn’t know the songs, they knew nothing of the stories inherent in the songs. Over the course of four hours that afternoon and then again when they got together for a final run-through an hour before the first show began on Friday, I could see the light come on in one person after another. For some it was not until the second night that it began to dawn on them that they were a part of something special. From my seat in the audience I could see the lights come on, come on, come on. 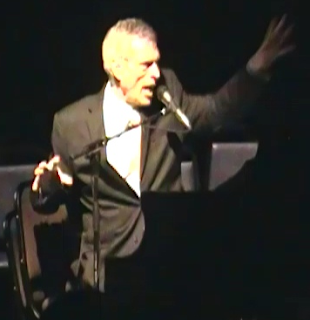 In addition to the students from SPSCC, local theater luminaries Josh Anderson (aka Saul Tannenbaum), Christina Collins and Lauren O’Neill were invited to sing. Since they were working day jobs they did not have an opportunity to rehearse until an hour before showtime.
There were still a few rough spots Friday night, but it was an amazing difference from the Thursday workshop, and by Saturday you would have thought they had been rehearsing the show for months.

Act One was Steve alone performing songs from his musicals “The Last Session” and “The Big Voice: God or Merman?” and telling stories about being the gay son of a Southern Baptist preacher in Arkansas and about almost dying of AIDS and how writing music and then new drugs brought him back from the edge of death.
Steve’s songs are narrative and theatrical. Each song tells a story, and the stories weave together into a tapestry of tales about love and life and death, about war and religion and triumph over adversity. Most of his musical stories begin with tragedy and end with hope, and they are all infused with humor. Musically they blend elements of pop, jazz, blues and church music.
In Act Two the students and guest singers were brought on to sing the songs of his “musical insurrection” New World Waking – a kind of rock-gospel operetta in three parts: part one: violence in the community; part two: violence in the world; and part three: the awakening suite. These songs were performed by the chorus and soloists with Steve playing piano and joining in on the singing on only a few of them.

Highlights included student soloist Jennifer Woodruff’s powerful singing on the bluesy “Brilliant Masquerade,” a song about the jazz musician Billy Tipton. No one knew that Billy was a biological woman until after he died.
Woodruff was also fabulous on another hard rocking blues number, “William’s Song,” which tells the true story of a young boy from Arkansas who was attacked after school and of his mother, the late, great Carolyn Wagner, who successfully sued the school. This song contains the memorable chorus line “Why does it take five great big guys to beat up one little queer?”
Saul Tannenbaum brought an unexpected bit of comic insanity with a song with equally insane lyrics about the absurdity of war and the people who wage war called “Franco Ate the Paperwork.”
Also outstanding were Collins and O’Neill, and student soloists Misha Excell-Rehm and Eliza Fowler, Zachary Busto, Kevin Burch.
For those who missed this once-in-a-lifetime show, take heart. Steve is coming back. He’ll be here in January for another PFLAG fundraiser, and then he will be performing with the great Righteous Mothers. We don’t yet know if they’ll do a repeat of New World Waking or something entirely new and different, but we can promise it will be great.
Posted by Alec Clayton at 7:56 AM