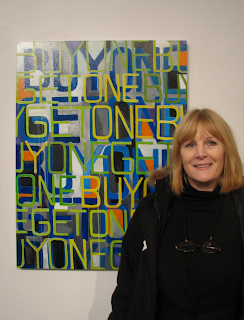 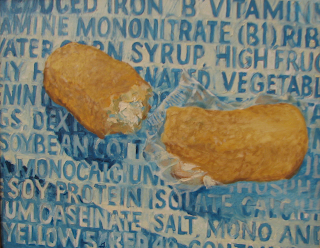 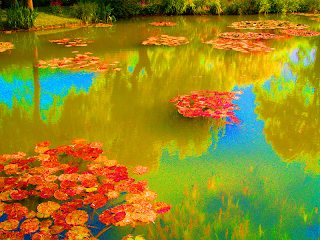 The Gallery at Tacoma Community College is celebrating Pop Art, the movement that revitalized American art half a century ago and has never quite gone away. Elements of Pop keep joyfully popping up.

There are a lot of clever images and sly humor. The artistic quality ranges from "How fabulous" to "He's got to be kidding." There's some really bad drawing, and most of it is grouped together along the back wall, the grouping indicating that perhaps these works were purposely done badly. Like, for instance, a clumsily drawn portrait of a blue-faced Lee Marvin holding a pistol and an equally klutzy painting of Richard Nixon that is really funny and politically astute.

There is also some outstanding painting, and like the really bad paintings, many of the really good ones are grouped together along one wall. Most notable of these are a group of paintings by Frank Dippolito that combine words and images in beautiful ways and a similar painting by CJ Swanson. Dippolito's "Snack" shows a Hostess cupcake on a blue field with all the snack's ingredients spelled out. Swanson's "Bogo," also on this wall, is the best painting in the show. The words "Buy One Get One" in yellow and green are repeated to fill the canvas over a gray background. There's a fascinating peek-a-boo effect of back-and-forth movement in shallow space and the paint application has the kind of lush look of Wayne Thiebaud's paintings of cakes and pastries from the early 1960s. Dippolito's paintings have a similar lush quality.

On the same wall is a wonderful group of photographs of flowers in Monet's garden by William Mitchell. The color in these photos is described by the artist as "over saturated." These are strikingly beautiful pictures.

Bret Lyon has a lot of fun work in this show, including the largest and the smallest works. The largest is a sculpture of a fork with a ripe red cherry skewered on the tines. It stands seven or eight feet tall and rotates on a motorized base. It's like a Claes Oldenburg sculpture - not very original, but lots of fun. The smallest is Lyon's sculpture of strawberries and other fruit in a spoon jutting out of one wall.

One of the most intriguing works is Lavonne Hoivik's "Read the Label," a homage to Andy Warhol made of sculpted Campbell's soup cans with something else that I will not mention because to mention it would be to ruin the surprise.