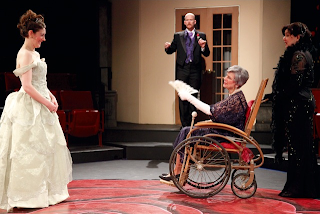 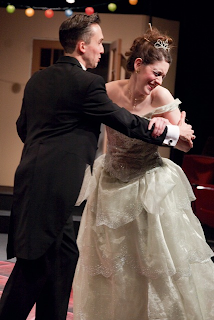 DEAN LAPIN/LAKEWOOD PLAYHOUSE
Top: Alison Wiles plays Isabelle, from left, Jamie Pederson is Romaineville, Syra Beth Puett is Madame Desmortes and Jill Goodman is Capulet in Lakewood Playhouse’s “Ring Round the Moon.”
Bottom: Matthew Vail as Hugo with Alison Wiles as Isabelle.
Christopher Fry’s adaptation of Jean Anouilh’s “Ring Round the Moon” fell out of favor some years back and is seldom performed, according to Lakewood Playhouse director David Domkoski, who is leading a production there. That’s a shame.

In its send-up of the pretensions of the wealthy class, this play is like a comedy of errors, but less formulaic. Its wit, charm and clever wordplay remind me of Oscar Wilde and William Shakespeare. Indeed, numerous Shakespearean references can be found and an all’s-well-that-ends-well ending.

The in-the-round seating at Lakewood Playhouse lends itself well to the many entrances and exits of the large cast. I particularly like the way they use brief but lush glimpses of a grand ball to transition between scenes.

As was typical at the time it was written in 1947, “Ring Round the Moon” is a fairly long three-act play. It might be better if it were shorter.

The plot is so complicated that Lakewood Playhouse saw fit to include in the program an outline of how each character is related to the others. It was fun to read but didn’t help much in sorting it out. It took me a while to figure out who was who, but that didn’t keep me from enjoying the comedy, which was funny from the opening line and got funnier through the second act. It grew preachy and bogged down a little in the third act, but became lively again in the end.

It is the story of a heartless and conniving man about town, Hugo (Matthew Vail), and his kind-hearted but ineffectual twin brother, Frederic (also played by Vail). Diana (Nicole Lockett), a beautiful heiress, is engaged to Frederic but in love with Hugo. Practically everybody except Hugo, who has no heart, is in love with Isabelle (Alison Wiles), a poor ballet dancer. Meanwhile, the beautiful Lady India (Kat Christensen) is carrying on with Patrice (Brandon Brown) while secretly in love with Hugo. There is a subplot about people pretending to be who they’re not; the surprise reunion of two old friends, Capulet (Jill Goodman) and Isabelle’s mother (Kathi Aleman); and a separate subplot about a millionaire, Messerschmann (August Kelley), who renounces his wealth.

Vail does an amazing job of playing the twin brothers. The women say they always can tell the twins apart, even though they look identical, because they can see into their hearts (or where Hugo’s heart should be). In keeping with this concept, Vail distinguishes the brothers with gesture and expression. He never resorts to costume or hairstyle changes or anything physical to distinguish between the brothers, yet there is little doubt as to which brother he is playing at any given time.

Wiles plays Isabelle with style and restraint. She starts out quiet and shy but gradually gains self-confidence, and Wiles makes her subtle changes in personality believable and natural.

Goodman and Aleman are outstanding in supporting roles. Goodman is charming and Aleman is really funny as Isabelle’s overly expressive and not-too-bright mother. Also outstanding are Andrew Fry as the butler and Syra Beth Puett as Hugo and Frederic’s aunt, Madame Desmortes. These two are the only level heads in the household.

Despite being asked to accept that otherwise intelligent women will fall helplessly in love with the heartless Hugo and not be attracted to his twin – who is just as handsome and charming and a much kinder person – I thoroughly enjoyed “Ring Round the Moon.”
Posted by Alec Clayton at 8:44 AM