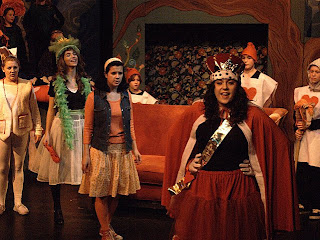 Olympia Family Theater’s annual all-youth production this year is “Alice’s Adventures in Wonderland,” based on the stories by Lewis Carroll.

It stars 15-year-old Rheanna Murray as the girl who goes down the rabbit hole – or in this instance, steps through a picture frame. Murray is a student at Tacoma School of the Arts. She plays Alice with dignity and grace, displaying a suitable amount of surprise and wonder at the crazy things and even crazier people she encounters in Wonderland, yet accepting every absurdity as just the way things are.

Why shouldn’t she drink from a bottle that says “Drink Me”? After all, it doesn’t show “Poison.” It must be safe.

In some ways, this is a Ryle family production. Jen Ryle directed it; her husband, Ted, is the stage manager; and her children, Mandy and Emmalene, worked on the production crew.

The cast, however, is all youths, so it is not as polished as some other OFT shows, including “Winnie the Pooh,” the last OFT play I reviewed. Nor is it as uproariously funny. But it’s great fun to watch the kids perform. Children in the audience have a good time watching the antics of Tweedle Dee and Tweedle Dum, the Mock Turtle and the smiling Cheshire Cat.

Like the adventures Lewis Carroll wrote about, this Alice appeals to children because of the vibrant characters and colorful costumes and to adults because of the sophisticated wit.

Fifteen-year-old Morgan Hanrahan, also a student at Tacoma School of the Arts, seems quite sophisticated and grown up as the painter who first lures Alice into Wonderland and later runs and bounces about quite frantically and entertainingly as the White Rabbit.

Karli Kooi plays the mouse. She’s a first-grader at Boston Harbor School, and she pouts and squeaks with expressive charm. I love the way she jumps up and claps her hands and squeals “Eeek!”

Katie Sellars is Tweedle Dee and Kylie Charney-Harrington is Tweedle Dum. They are hilarious together as they share the same costume. They are each quite accomplished actors.

Nick Melton, who attends Capital High School, really puts his heart into his role as the Mock Turtle. His outlandish sobbing brings the house down.

The set by Mandy Ryle is colorful, and the costumes designed by Becky Scott and put together by the team of Sally Fitzgerald and Shelle Riehl are delightful. Particularly enjoyable are the Caterpillar’s extra arms, the queen’s robe and crown and Humpty Dumpty’s outsized body and legs. It’s not really a costume, but you have to see how Alice grows larger.

This show is relatively short at 90 minutes with a 15-minute intermission, and it is fast-paced. The time flies by.