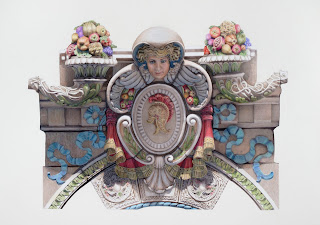 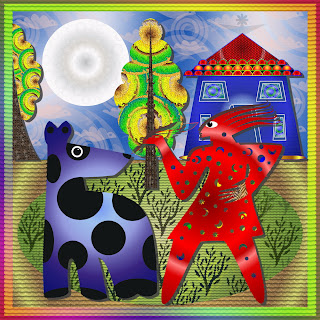 Top: "UPTOWN BROADWAY ANGEL": A work by Betty Sapp Ragan currently on display at Tacoma Public Library. Bottom: collage by Mauricio Robalino (not in the show)

Mauricio Robalino and Betty Sapp Ragan at the Handforth Gallery

When I saw the announcement for the Mauricio Robalino and Betty Sapp Ragan exhibition at the Handforth Gallery I was initially blown away by the image of a Robalino collage included with the announcement, but I was slightly let down by the actual work. Although hotly colorful, playful and well designed, the collages in the gallery are not as good as the image on the announcement. But don't let that deter you from seeing this show. It is enjoyable.

Less playful than Robalino's collages and more subtle in their classic austerity and harmonies are Ragan's hand-colored digital images.

Back to Robalino. He was born and spent his childhood near the equator. He moved to England with his parents when he was 10 years old, and he studied art in the United States, but his art shouts Latin American culture and tradition. His collages are crowded with images of birds and animals and people and dense vegetation, and they fairly scream hot tropical climate with their bright contrasts of complementary colors - most in the blue-green to red-orange range. The compositions use classical balance throughout.

"My art is a celebration of life which expresses a deep love for vibrant color, dynamic composition and inspired whimsy which is stimulated and nurtured by my interest in the arts of all times and cultures, especially those of Native America, the Mediterranean, Tibetan mandalas, Indonesian puppets, and the germinal art movements of the early twentieth century," Robalino wrote in a statement.

My favorite piece was an untitled collage on the wall to the left as one enters the gallery. There is a sunburst in the center at top with a man's face below that and throughout are wave forms, birds, animals and flowers. The background is mostly blue, and the figures are in various tones of orange and gold.

Ragan's more formal images combine hand-colored portraits with digital prints of architectural forms. They are subtle and classical with just a hint of whimsy. One of my favorites is called "Get Your Ducks in a Row." It is a section of architectural trim with two masculine figures that remind me of Michelangelo's slave sculptures. Balanced on either side are a gear and a wheel with a crest in the middle. And there are ducks. Tiny little cut-out duck figures that you have to look at very closely to see that there are women's faces inside the cut-out shapes.

Another favorite is "Uptown Broadway Angel". Above a portal sits a carved figure of a crest and a woman's face with fruit bowls on either side. The figures look simultaneously ancient and modern, which is the effect of all Ragan's pictures. The color is delicate and sweet, and the modern-style hand-coloring blends beautifully and seamlessly with the classical architecture.