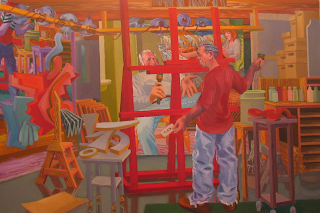 Self-taught artist Barlow Palminteri, seen here in a self-portrait with his friend Ron Hinson, is among Alec Clayton’s picks for the best artists of the year.

My choices for the best South Sound art exhibits of 2010 in chronological order are:

Troy Gua's memorial to loss at Fulcrum Art Gallery in March. There were actually two Troy Gua shows in one. The title show, Monument: A Memorial to Loss filled the small room to the left upon entering the gallery. Created especially for the exhibition, it was Gua's sober commentary on the loss of life and limb in the wars in Iraq and Afghanistan. The other two rooms were filled with Gua's slick and polished tributes to iconic figures dead and alive, including Marilyn Monroe, Albert Einstein, David Bowie and Boy George - each portrait ingeniously and humorously combining portraits of two different celebrities.

Next up, Lisa Sweet at Kittredge Gallery in April. Sweet re-envisioned and reinterpreted Medieval and early modern Christian iconography. Her settings were timeless, with figures in nature or set in interior scenes that looked equally like modern settings and the interiors of Van Eyck paintings. These paintings were thoroughly modern yet timeless and with a quirky sense of humor.

Tacoma Art Supply featured Outsider artist Tyrone Patkoski in May. Patkoski's two- and three-dimensional art was not only powerful and gritty, it was well designed with a good sense of balance, rhythm and color composition.

Tacoma Art Museum's 15th anniversary Neddy fellowship show this past summer was the best show of its type I've seen in a long time. Outstanding paintings in this show included Europa and the Bull from the very first Neddy winner, Michael Spafford. Also impressive were Lauri Chambers, a former Spafford student, and Randy Hayes' The Ferry to Eagle Lake, a monstrous montage of photographs pinned up with push pins and painted over with oil.

If I had to pick a single best show it would be Paintings by Barlow Palminteri and Ron Hinson at the Minnaert Center Gallery at South Puget Sound Community College in September. This show was big, bold and colorful.

It's too late to see any of the shows mentioned above, but mark the artists' names. They'll be back in other shows. What you can still see if you hurry is the great Picasso show at Seattle Art Museum. This is not only the biggest and best show in Washington state this year, it may well be the biggest and best in the United States, if not the world. It runs through Jan. 17. Don't miss it.
Posted by Alec Clayton at 11:33 AM