Ignore the calendar, its the 1960s 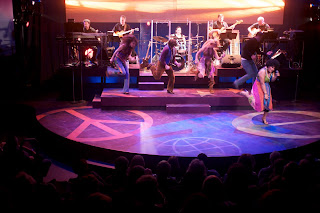 Published in The News Tribune and The Olympian, July 2, 2010
Photos by James Bass

If there’s a place called Heaven that we go to after we die and if we are met there by a heavenly choir, that choir will surely sound something like Antonia Darlene singing “Let It Be” in Harlequin Productions’ summer musical review “Sixties Kicks.” Her performance on this song is a transformative experience; it lifts you to another plane and sets you back down feeling speechless and breathless. And this is but one performance in a night of mostly magnificent performances.

Every summer Harlequin puts on an original musical review. They may be tribute pieces such as those in recent years that honored Atlantic Records and Motown, or as they did last summer, a compilation of hits by sixties girl groups. This year they return again to the 1960s with a lineup of songs by the Beatles and Rolling Stones and Bob Dylan and many others from that rocking decade.

There is no dialogue and no story line. Historical highlights from the era are projected on the wall behind the band. The band, essentially the same as every year, is very likely the best house band south of Seattle. It is made up of David Broyles, guitar; Rick Jarvela, bass; Maria Joyner, drums; Brad Schrandt, keyboard and horns; and Bruce Whitney, keyboard and musical director (plus a mean acoustical guitar).

The cast is Darlene, Kate Dinsmore, Mike Lengel, Alison Monda and Matt Posner. They’re all good; some much beyond good. I’ve already mentioned how stupefying Darlene was on “Let It Be.” She’s outstanding on other songs, too, as is Dinsmore, especially on another Beatles hit, “I Want to Hold Your Hand” and on “Do You Believe in Magic.”

The two who really light up the stage are Monda and Posner. Posner is simply a fabulous singer who puts his heart in every song he sings. He’s mesmerizing on the Simon and Garfunkel anthem “America.” He stands out in the chorus on the Beach Boys’ medley “I Get Around/Fun, Fun, Fun,/Good Vibrations.” He sounds like the Beach Boys – all five of them. He’s mesmerizing on “Crystal Blue Persuasion” and rocks with raw energy on the Stones’ “Satisfaction.” If there’s a singer anywhere in the South Sound who can slip in and out of varying styles as easily as Posner, I’ve yet to run across him or her.

Monda electrifies the house with her energy. I’ve seen her more often as a member of the ensemble or in dramatic and comedic roles. I had no idea she could sing rock and roll with such power. Her rendition of “The House of the Rising Sun” is fabulous, and her dancing is so energetic and enthusiastic that’s it’s hard to resist jumping on your feet and joining her on stage.

Finally there is Lengel, who, in the first act, doesn’t seem to fit with the rest of the cast. For starters, he stands head and shoulders above the rest (someone said he is six-foot-eight), but he doesn’t use that height to advantage. He seemed to be restrained throughout the first half of the show. His first solo is a nice but subdued version of the Harry Nilsson hit “Everybody’s Talking At Me” from “Midnight Cowboy.” And then he’s a big letdown on “Light My Fire.” He sings it nicely, but he’s far too restrained. I wanted to hear him scream out “Fii –yah!” the way Jim Morrison did. Thankfully, in the second act he more than made up for whatever might have been missing in the first act. He does a wonderful job of soloing on a couple of Bob Dylan songs, most notably “All Along the Watchtower.” He’s also outstanding on “Honky Tonk Woman.”

This is a follow-up to last year’s “Sixties Chicks,” which was in many ways the weakest of Harlequin’s many summer music reviews. I was particularly let down by the costuming last summer. Not so this summer. Ingrid Pugh-Goodwin nailed the sixties styles with high theatrical flair.

Unless you’re stone cold deaf, you’ll leave the theater thoroughly satiated, and you’ll be humming these tunes for weeks to come.