Elvis hasn't quite left the building 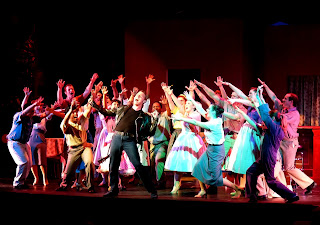 Review: “All Shook Up”
Published in The News Tribune, July 16, 2010
Photo by Kat Dollarhide

A musical comedy salute to Elvis Presley that is a loose retelling of Shakespeare’s “Twelfth Night” would be downright audacious, and that’s just what “All Shook Up” at Tacoma Musical Playhouse is. Written by Joe DiPietro, who is probably most well known as the author of “I Love You, You’re Perfect, Now Change,” this lighthearted tribute to Elvis is delightfully fun and energetic.

TMP artistic director Jon Douglas Rake emphatically stated and repeated in the program and in his curtain speech that “All Shook Up” is not a show about Elvis. But Steve Barnett as the roustabout musician Chad is clearly an Elvis-type character. His costumes and his moves are intentionally patterned on The King – with a little hint of Marlon Brando in “The Wild Bunch” thrown in. Even the main comic sidekick, Matt DelaCruz as Dennis, throws in a little Elvis “Thank you very much.”

Despite emphatic denials, this show is all about Elvis – which is what makes it sparkle and, simultaneously, brings it down in places. There are so many wonderful songs, but the ghost of Elvis hovers over the stage and no one can sing “If I Can Dream” and “That’s All Right” and “Can’t Help Falling in Love” like Elvis.

Barnett has the sultry good looks and the voice to carry off the role of the rebel singer, but his Elvis gyrations seem strained and unnatural. Ironically, Micheal O’Hara does those same moves much more naturally and comfortably. O’Hara plays Jim, an older man who recaptures his youth by copying Chad’s moves, and he steals every scene he’s in. He is probably the most the most accomplished actor in the cast, and it shows.

Other actors who bring fire and peals of laughter every time they take center stage are DelaCruz and Heather Malroy as Miss Sandra. DelaCruz’s Dennis is a 1950s-style nerd with a decided lack of self-confidence. He is not only hilarious, he has a great voice. His solo on “It Hurts Me” is one of the best solo performances in the show. Malroy as the intellectual Miss Sandra is big, brash, and stylishly sexy.

Other outstanding actors are Lauren Nance as Natalie, the female mechanic who is in love with Chad and disguises herself as a man named Ed in order to get close to him; LaNita Hudson as Sylvia; Jasmine Carver as Sylvia’s daughter, Lorraine; and Jon Huntsman as Lorraine’s boyfriend, Dean.

Highlights include the great ensemble performance of “Can’t Help Falling in Love” that ends act one, the wonderful running joke of everybody singing “One Night With You,” and the great dueling guitars on “Devil in Disguise.”

The scenic design by Rake and Will Abrahamse is excellent, and scenes are easily and unobtrusively changed. The simple scaffolding in the fairgrounds scenes highlighted by John Chenault’s lighting is especially nice, as is the beautiful drop curtain in the final scene. Also especially nice is the theater magic of faces of the cast popping out of the museum and of paintings of belly dancers at the fair becoming real live dancers. These are the kinds of touches that make musical theater come alive.