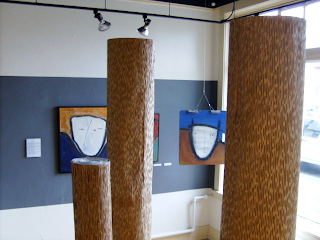 Generations of art at Fulcrum
Published in the Weekly Volcano, July 22, 2010

"Here & Now," the latest show at Fulcrum Gallery, is an investigation of the styles and concerns of Tacoma artists of different generations from Lynn De Nino, born in 1945, to Ian Wheelock, born in 1997 — 16 artists in all including students from the Hilltop Artists in Residence Program.

So what’s the big difference between 13- and 14-year-old students and established professionals such as De Nino, Jeremy Mangan and Holly Senn? It would appear from this show that the difference is not in artistic ability but in what kinds of things they like to do. The younger artists display a noticeable penchant for graphic novel/comic-style art, and older artists appear to be more sophisticated conceptually (it would be really bad if they weren’t). On the other hand, Teddy Haggerty, born 1953, draws in a style very similar to that of some of the teenage artists. That’s not to say this former Alex Baldwin stand-in is less sophisticated, but just that he is young in spirit. (Whoever hung the show must have had a similar impression since they put Haggerty’s three drawings in the back room with all the students). The best of his works is a colored pencil drawing of a penguin, a nude woman and a wall full of hearts. This drawing is like a blending of Fay Jones and Jim Dine.

One of the most impressive pieces in the show is a sculpture of three tree trunks by Senn that is made from cardboard, glue and pages from old books. It is simple, attractive and conceptually multi-layered, with references to how paper made from trees is made into books and eventually becomes a tree once again.

The most impressive paintings are three portraits titled "Furies" (1, 2 and 3) by Malcolm McLarren. These are strong, minimalist Abstract Expressionist portraits with glaring white faces and hardly any features. Very haunting.

De Nino has two satirical pieces that, typical of her, make strong points with a humorous twist. One is a pinball machine in which you get points for striking local political figures. The other is a shower curtain and shower head that is nothing unusual until you see what’s on the inside of the curtain (which I’m not about to divulge). It’s called "I Only Have Eyes for You."

Among the more outstanding student works is a series of five cut-out portraits of a woman named Olivia in acrylic on paper by 18-year-old Louise Blake and three delightfully surrealistic pencil drawings by Dylan Buffler, 14.