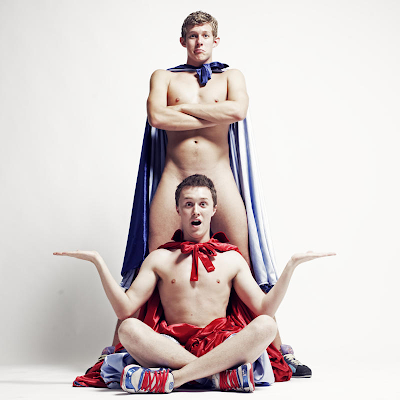 This is wild, and should be a lot of fun for those who are into this sort of thing.

I didn't write the following. It's a press release from ... get this ... Puppetry of the Penis.

The wildly successful Puppetry of the Penis returns to Seattle October 20-24 with two new cast members, the Northwest’s own Christopher J. Cannon and his puppetry pal, Rich Binning. Together they will share their jaw-dropping new tricks with Seattle audiences for five outrageous performances inside ACT’s Falls Theatre.

Just a few short months ago one of the Puppetry of the Penis creators, Simon Morley led an arduous nationwide search to find two new Puppetry stars, and one of this show’s bright young talents was discovered right here in our own backyard!

Northwest native Christopher J. Cannon’s unusual natural abilities in the Ancient Australian Art of Genital Origami left Morley speechless. The 23-year-old discovered his own natural gift for “dick trickery” after seeing Puppetry of the Penis for the first time at age 17, in Portland near his hometown of Vancouver, WA. Over 650 men and a few women have auditioned to be a penis puppeteer. But only 20 men have been tapped to officially hold the Puppetry of the Penis torch (totaling 143 inches).

Requiring amazing concentration, astonishing stamina, an unbelievable stretch factor and a remarkable level of testicular fortitude, this show leaves women and men gasping at over 40 heroic and hilarious penis installations including the Pelican, The Windsurfer, The Eiffel Tower, Loch Ness Monster, and their signature installation, the Hamburger. A video camera projects intimate detail of the installation onto a large screen ensuring little can be missed - even from the very back row!

It has been over 10 years – or a dickade – since audiences were first wowed by the genital origami extravaganza that is Puppetry of the Penis. Since then the show has played to over 10 million people, been performed in 5 different languages, travelled to 30 countries and endured temperatures ranging from 52 degrees to – 38! Celebrities like HughGrant, Naomi Campbell, Posh Spice, Bono and Elton John have joined the crowds.It has been translated into three languages, had a “how to” book published, been played non-stop on HBO’s “Real Sex” since 2002, and had DVD releases throughout the world.


History of Puppetry of the Penis

Puppetry of the Penis was conceived by Simon Morley in 1996 as the title of a classy, highbrow art calendar, showcasing twelve of his favorite penis installations. Years before, Simon’s youngest brother had shown him his first genital trick, The Hamburger. Natural sibling rivalry with their two other brothers resulted in the evolution of a healthy repertoire of genital gesticulations. It was on New Year’s Eve in 1997, with a garage full of calendars to sell and burgeoning requests for live demonstrations that Simon finally decided to unleash his talent on the world.

The natural choice of performing partner was David Friend, whose reputation as the life of any party was quickly growing. As a young boy, Friend began his current career in the bath and developed his skills further when he discovered beer at university in Byron Bay. After completing his degree in computing, he returned to Melbourne with his own highly individual collection of hanging art. Together, Simon and Friend became Puppetry of the Penis. Their debut season at the 1998 Melbourne International Comedy Festival was a huge hit. Simon and Friend then embarked on a national tour, circumnavigating Australia. This took eight months, covered 20,000 kilometers and was captured in all its glory in the documentary Tackle Happy.

A runaway hit at the Edinburgh Fringe Festival 2000, Puppetry of the Penis then set about the task of world domination, playing London's West End, the Melbourne International Comedy Festival, Montreal's Just for Laughs Comedy Festival and launching multiple US companies, with one playing the John Houseman Theatre in New York for 2 years, and another two touring extensively, with sit-downs in Los Angeles and San Francisco. As of today, most of the Western World has played host to Puppetry of the Penis. Due to popular demand, Simon and his band of penis puppeteers continue to take their penises to the people with performances in Australia, Canada, USA, the UK and South Africa.
Posted by Alec Clayton at 8:41 AM

I reviewed "Vagina Monologues" and "Puppetry of the Penis" in the same week, which shows that when women get together they spend long periods of time discussing their feelings and men play with themselves.

I had such fun writing the "Penis" review! http://criticontheloose.blogspot.com/2006/01/puppetry-of-penis_22.html

(Also funny that the word verification for this entry is "gents" !!!)