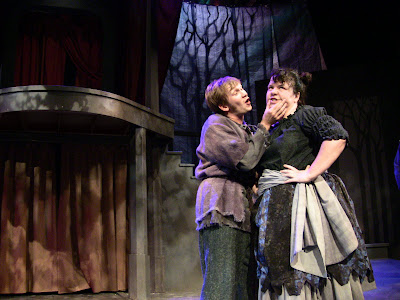 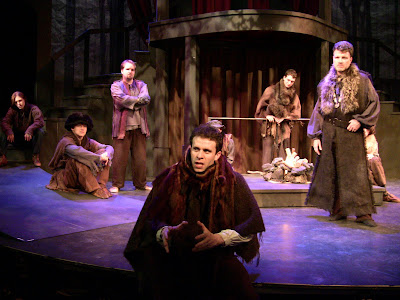 Three years ago, Harlequin Productions put on a performance of “A Midsummer Night’s Dream” that was the most elaborate and outrageously funny Shakespeare comedy I had ever seen. I would not have believed they could match that performance, but they have with their current show, “As You Like It.”

A lot of the same actors are in it, including Amy Hill, Dennis Rolly and Paul Purvine – all of whom are even better in this show – and Jason Haws, who matches the comic antics of his death scene in “Midsummer” with a hilarious display of the 150 ways he’s going to kill William (Roderick Campbell), which has the feel of off-the-cuff improv.

Many critics claim that “As You Like It” is light and frothy and one of Shakespeare’s less successful plays. Harlequin artistic director Scot Whitney says he tended to agree with that assessment until he tackled this production after being challenged and inspired by lead actress Jane May who, when Whitney said few actresses could convincingly play Rosalind, replied, “That’s because you’ve never seen my Rosalind.” Suffice it to say, she nails it. As Rosalind at court, she is slightly demure and very giggly-girlish, but when she dresses as a man and takes on the persona of Ganymede, she is brash, sassy and totally in control.

I could pick at random any actor in this play and rave about his or her performance.

Russ Holm specializes in outrageous characters, and his portrayal of Duke Frederick definitely is outrageous. He pitches his voice higher than normal with an affected accent, and struts and poses like a self-important demagogue (demigod might, in fact, be a better description). But when he plays older brother Duke Senior, who leads a band of exiled men a la Robin Hood in the Forest of Arden, he tones it down just enough to be convincing as a charismatic leader.

Amy Hill turns in what might be her best performance as the adorable and adoring Celia, whose admiration for Rosalind and later love for Oliver (Casey D. Brown), bubbles like champagne.

Trick Danneker as Orlando looks like a young Anthony Perkins and plays his part with sincerity and restraint. (In this show, some restraint is needed.)

Dennis Rolly brings the crippled old servant, Adam, to creaking life. He hobbles, his voice cracks and he truly seems to be on his last leg. Then when Rolly doubles as Corin the woodsy philosopher, he seems wise and relaxed, with a knowing twinkle in his eye. Rolly proves himself once again to be a consummate character actor.

Paul Purvine is a young actor just beginning to find his voice. He first began to really shine in “Midsummer” with his acrobatic love scene on a revolving platform. Now in “As You Like It,” his comic skills are honed to a fine edge. He plays the courtier Le Beau as flamboyantly effeminate, with a high-pitched voice and constantly twirling a handkerchief, and then changes into a whirlwind of romance as Silvius, who is lovesick for Phebe (Rachel Permann), who treats him like dirt. (Whitney says Purvine improvised his particular interpretation of Le Beau during rehearsals and they wisely decided to keep it.) In Silvius’ pursuit of Phebe, Purvine engages in some physical comedy bits that simply have to be seen to be believed.

Speaking of physical comedy, Haws as Touchstone the fool and Melanie Moser as the lusty goatherd Audrey climb all over each other superbly like acrobatic circus clowns.

Like nearly all Shakespeare comedies, this one is filled with mistaken identities, gender swapping, sexual double-entendres and wise social commentary disguised as jokes. But the plot is not so complex and hard to follow as some of the bard’s plays, and the language is not as hard to understand. Still, it is Shakespeare; the language is of the 16th century, so I would suggest becoming familiar with the plot before watching it. There is an excellent plot summary in the program, and I highly recommend that people who haven’t seen this play before get to the theater early enough to read it.