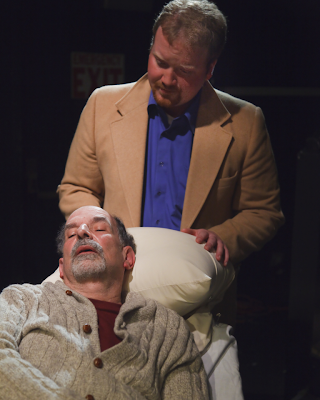 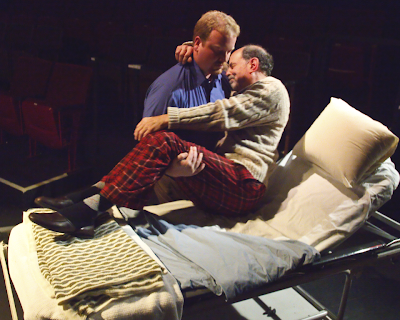 Morrie Schwartz’s wisecracking saves “Tuesdays With Morrie” from being maudlin. But the play now being performed at Lakewood Playhouse is still a tearjerker.

Based on a true story and written by Jeffrey Hatcher and Mitch Albom, this two-character play recreates the last four months in the life of Schwartz, who died of ALS, or Lou Gehrig’s disease, as witnessed by Albom, his former student who visited him every Tuesday as his body degenerated.

The disease is horrible. There were tears in the eyes of Lakewood Playhouse audience members as well as in the eyes of cast members Luke Amundson as Albom and Elliot Weiner as Schwartz. But it is also a funny play and a nuanced character study.

Schwartz and Albom are the only characters, so they are both on stage almost the entire 80- minute, no-intermission play, and both actors express extreme emotions, subtle personality traits and, in Schwartz’s case, a steady degeneration of bodily functions. These are the kinds of challenging roles actors salivate for, and Weiner and Amundson are up to the challenge.

The role of Morrie Schwartz is certainly a dream role for any actor. In his portrayal of the dying professor, Weiner gets to dance, wittily retort to Albom’s often inept questions, express heartfelt emotion, laugh, cry and portray the loss of muscle control. His dancing is not smooth, but he is, after all, an aging professor, not Fred Astaire. His sincerity, his smart-alecky digs at Albom, and the way he portrays the progression of the disease are absolutely believable.

The role of Mitch Albom is not so obviously an acting tour de force. In many ways, Albom is little more than a foil for Schwartz to play off of. But in subtle and less obvious ways he is a huge challenge for an actor, because Albom starts out as a detached and aloof man who is unable to express emotion or connect with other human beings in any meaningful way, and then he is gradually transformed by Schwartz’s goading and example into a more caring person – but never a man who can easily express his love.

Throughout the play we see Amundson reaching out and pulling back. He is stiff, unable to relax. At first it might seem that the actor is trying too hard, but as the character’s personality is revealed, we realize that that stiffness is integral to his character. Amundson can’t be natural because Albom can’t. Even when Schwartz brings Albom to tears in the most emotionally wrought scene in the play, Amundson keeps his emotions in check, and you can feel how tightly he is wound. That’s more than acting; that’s becoming the character.

Director Brie Yost notes in the program that the set by Hally Phillips is kept simple and unadorned to keep the focus on the actors. This was a good idea, but it didn’t quite work. The set looked rough, unfinished and too obviously a stage set rather than a living room. Two windows on the back wall looked to be hanging by ropes against a backdrop rather than part of a wall. A more realistic set would be better, as would be no set at all but rather just the few needed pieces of furniture against a blank backdrop. This set falls somewhere in between and therefore directs too much attention to the fact that it is a set.

Similarly, while the black-box setting with seating on three sides provides the kind of intimacy this play needs, if the furniture had been farther from the back wall, the intimacy would have been greatly enhanced. As it was, when the actors were in the corners of the stage, some in the audience had to crane their necks to see them. There was a talk back with the actors and artistic director Marcus Walker after the play opening night, providing those who stayed insight into the art and craft of performing this play as well as into the true lives of Morrie Schwartz and Mitch Albom. They indicated they might do a talk back after every performance. Actually Weiner, reverting to character as Schwartz, wisecracked that they were taping the talk back and would play it after every performance.