Wilde’s ‘Earnest’ gets an electrical update 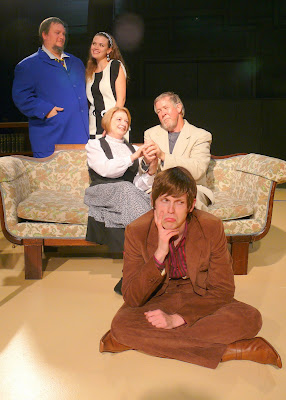 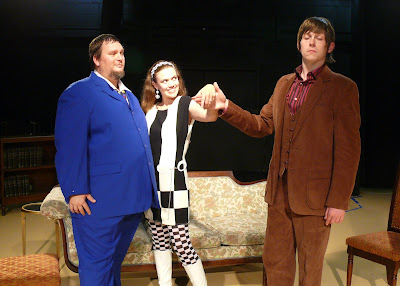 Olympia Little Theatre has updated Oscar Wilde’s classic comedy of manners “The Importance of Being Earnest” to the swinging England of 1968, the era of such popular British films as “Georgy Girl” and “Alfie.” This play, performed in the round, has much of the flavor of those films. Other than a florid manner of speaking, which may have been the height of fashion among pretentious Brits in 1895 but which seems stilted today, the update seems perfectly fitted to the affectations and love of fashion in Wilde’s comedy.

But I suspect the real reason for updating the play was it provided an excuse to use fabulous ’60s costumes. The mod outfits were all the rage at the time, and costumier Allison Gerst came up with some doozies for this production. Gwendolyn’s bold-patterned mini-dresses, stockings and high boots are a delight, and the suits John Worthing and Algernon Moncrieff wear in Act 1 are amazing. Algernon wears a mustard yellow shirt with a turquoise blue sports coat while Worthing is wearing an eye-popping electric blue suit. Their neon blue tones contrast with equally bright orange pillows and divan cover, signifying an understanding of color that is impressive.

On the other hand, when John’s make-believe brother dies, he wears black-on-black mourning clothes with a top hat that harkens back to Wilde’s day.

And just as the colors are electric in their intensity, there are electric sparks between the two principal couples – not the lovers so much (Jack/Gwendolyn and Algernon/Cecily) but the buddies (Jack/Algernon and Gwendolyn/Cecily). It is the repartee between the old friends of the male sex and the newly bonded friends of the female sex that truly sparkle.

Seldom will you see any two women spat so joyfully as these two do and then collaborate with such mutual admiration after they discover they are each engaged to the same man (which they’re really not). And rarely do drunken buddies fall all over each other so happily as Jack and Algernon when they sing “What’s New Pussycat.”

Christopher Cantrell plays John, who is sometimes called Jack and who has an imaginary brother named Earnest, as a proud but confused young man who is simultaneously blustery and vulnerable, and believably sincere even when he is lying. Cantrell is masterful in this role. He seems not to be acting at all. He does anger with grand intensity. When he professes his love for Gwendolyn, his eyes sparkle, and there is no doubt he is head-over-heels in love with her.

Kathryn Wanless as Gwendolyn and Quinci Daoust as Cecily are equally bubbly and excitable and marvelously expressive. Wanless is new to South Sound stages, having come here after a long acting career in England. Daoust is also new to the area; she’s a high school student from Portland who is commuting for this performance. Despite their actual age difference, both women are convincing as impressionable, lovestruck 18-year-olds. Both are charmingly effervescent.

The fourth member of these couples is Patrick Wigren as Algernon. Tall, thin and handsome, Wigren wears a wig I would not have known was a wig if I hadn’t seen him take it off. He hams it up as the histrionic Algernon, a character that allows an actor to go all out. He lounges like a diva on the divan and minces his words and delicately fingers his cucumber sandwiches. Algernon is not gay, but he is an alter ego for Wilde, who was flamboyantly gay, and Wigren seems to inhabit Wilde’s devil-may-care spirit.

“The Importance of Being Earnest” is not an uproarious comedy. It’s not the kind of comedy that makes people stomp their feet and fall out of their seats laughing. It’s more a thinking person’s comedy. I admire the writing, with its Shakespearean identity confusions and parallel fantasy lives, and I admire the acting by the four principal characters.

I saw this play in rehearsal with some of the actors still on book and without complete lighting and sound. I enjoyed it very much, and I predict it will be even more entertaining in full production.

I saw Wilde's comedy many times as the musical "Ernest in Love" before I actually saw the play. I missed the songs! (How can you not like "A handbag is not proper mother"?