Magical murder mystery in the moonlight 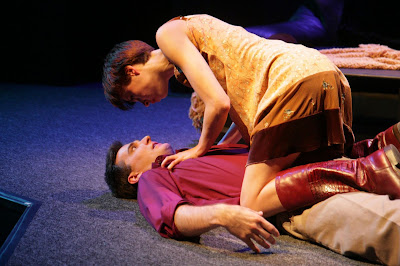 “Mating Dance of the Werewolf” by Mark Stein is unlike anything seen on Puget Sound stages. It is a beautiful, moody, hilarious love story, and it’s a murder mystery/comedy about one of the rarest creatures in literature or entertainment – a female werewolf.

The play, directed by Scot Whitney, is cinematic in presentation with movie-style flashbacks and hints of film noir and swelling music during the most dramatic moments a la 1950s love stories.

In program notes Whitney tells how the playwright queried him with sample pages from the script.

He writes that he was immediately intrigued by the title and by the opening line of the play.

It opens with the piped-in sound of a police radio dispatch. Ken (Aaron Lamb), an off-duty cop in running shorts, sits on the front of the stage smoking a cigarette. His boss, Raul (Steve Manning) approaches and Ken asks, “Have they found Allen’s head yet?”

From this bizarre opening line, a murder mystery unfolds as Raul questions Ken and his answers are acted out by Ken and the remaining cast of characters: Ken’s girlfriend Abby (Helen Harvester, the werewolf); the dead guy, Allen (Daniel Wood), who is a fellow cop and, if not exactly Ken’s friend, at least a guy to spends a lot of time with him; and finally Pam (Tracy Leigh), Allen’s girlfriend and Ken’s ex-wife.

So Allen has been murdered, and that’s all the plot I’m going to divulge. It is, after all, a mystery.

In the present, all of the characters talk to each other about what led up to the murder, and in the past they act out what happened.

The transitions between present and past are seamless and, in some instances, almost dreamlike.

The set by scenic designer Jill Carter is as unique as any I’ve ever seen. It’s Ken’s living room. The walls and all the furniture are black. Even the bookshelf and all the books on it are black.

Nat Rayman’s lighting design is dramatic. The projected images of a moonlight forest at night are both dramatic and highly romantic, intentionally clichéd.

Seldom has sound played such a large part in a drama, from the police radio to soaring, lush music that lends that 1950s-style kitsch to the love scenes. Credit sound designer Keith Jewell and a crew of actors reading the police dispatches, including Douglass Bowen-Flynn, John O’Keefe, Rod Campbell, Rayman, Jewel, Whitney and Ann Flannigan as the dispatcher.

All of the cast members are highly competent actors. Harvester and Lamb together and singly make impossible-to-believe characters and situations seem almost real.

Harvester is inspired as the woman who turns into a wolf. Her physical gestures are dance-like whether she’s actually dancing (there’s a tango with Ken that’s highly sexualized in an almost sado-masochistic way) or whether she’s simply moving around in Ken’s living room – but Abby never simply moves around; she leaps and stretches and contorts her body while climbing over furniture and out of windows and slithering up and down Ken’s body. Never mind that some of her moves are more spidery and catlike than wolf like; her physicality is mesmerizing.

In the best of live theater there are moments when the lighting and sets and music and acting all converge in ways that transport the audience to a magical place where a woman really can turn into a wolf and a cop can fall in love with her.

Such moments are rare, but they happen in this play. One such moment is the first time Abby climbs out the window to vanish into the moonlit night. I may never forget her silhouetted image in one frozen moment.

There are also scenes in the best of plays that fit as snuggly as Spandex on an athlete and yet are totally unexpected and somehow out of keeping with everything that has gone before.

Such scenes can shock the viewers or make them go wild with laughter. There are many such scenes in “Mating Dance of the Werewolf.” The tango mentioned above is just one such scene.

Despite murder and horror and scenes of intense sensuality, this play is neither scary nor obscene. If movie ratings were applied, it would probably rate a PG.