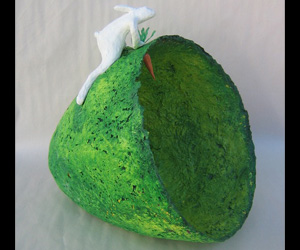 There are two art exhibits running in Tacoma that end this weekend, one very serious and high-minded and the other cute enough to make you want to puke. I’m talking kitsch cute that’s so bad it’s good. The shows are "Flux" at Gallery Madera and "Rabbitual" at Two Vaults. Both shows run through Saturday, Sept. 12.

"Flux" is part of the citywide MetalUrge show, which has been going for quite some time, and features wall mounted sculptures by Christine Parent, Chris Spadafore and Jennifer Weddermann-Hay, free-standing sculptures by Danella Sydow and Chris Wooten, and jewelry by Amy Reeves and Cynthia Wood. Plus, Madera Furniture designers Carlos Taylor-Swanson and Steve Lawler will feature new works, and as if that were not enough, the show also includes new paintings by Angel Matamoros.

"Rabbitual" at Two Vaults has 77 works by some 45 artists, and they’re all about rabbits. There are sculptures, paintings and drawings by artists such as Catherine Swanson, Diane Kurzyna, Carol Hannum, Joseph Batt and Lynn DI Nino. Most are simply too cute and cuddly for words. Some are rather macabre, such as Zoe Williams’ stuffed and mounted bunny rabbits, which are white and fluffy and mounted on the wall like deer heads as if shot by some mad hunter — Elmer Fudd, perhaps. Or a piece by Di Nino with a sculpted white rabbit climbing up the outer shell of a sliced-open earth that looks like half a watermelon, trying to grab the carrot that’s planted here. Or like Lee Musgrave’s "Soft Encounter," a drawing of a nude that looks like Boucher’s "Miss O’Murphy" — the corniest piece of soft porn ever created by an artist — only she’s a sprite on a stump face-to-face with a rabbit.

Cynthia Wood’s jewelry pieces at Gallery Madera are bold and elegant and influenced by marine life and sailing in the Puget Sound.

Works from Danella Sydow’s "Aphrodite" series are sensual abstracted forms in bronze based on women’s bodies.

The works in "Flux" are as serious, heavy and commercial as the works in "Rabbitual" are fluffy and sweet.

I have reservations about a lot of the works in each of these shows as being too cute or too commercial, but each show has enough really good stuff to make it worth seeing.

Coming up next at Two Vaults is a show of paintings by Christopher Mathie depicting the animal life in and around the Puget Sound. These works promise to be big and bold in Mathie’s painterly style, which will be a departure from the rabbit theme while still dealing with animal imagery.