Photos from my latest exhibition

The installation shots (above) of my exhibition at the gallery at South Puget Sound Community College in Olympia were sent to me by Jane Stone, head of the art department at SPSCC. Thanks, Jane. She included a number of shots of individual paintings but of those I am posting only one, "Window Bill" (see below). Each of the other paintings are posted on my website.

The exhibition continues until March 31, so if you haven't seen it yet, please do.

"Window Bill" and the golden mean

It was Christmas morning, the winter of '88, our first year in Olympia. It had snowed the night before. The boys got up early. We were waiting for our friend Catherine to arrive before opening the Christmas presents. Our youngest son, Bill, started wiping the condensation off the window in a sweeping motion as if his hand and arm were a large windshield wiper. Gabi grabbed her video camera and filmed him, and later she used that footage in her senior project film at The Evergreen State College. She titled the film "Window Bill." It combined live action and animation.

Years later, I was invited to participate in an art exhibition based on the idea of the golden mean, a formula for proportions the classical Greeks considered the ideal. I think it was the only time in my life I ever painted a picture specifically for a show. I drew a grid on the canvas based on the golden mean and painted to the grid. The final result reminded me of the windshield-wiper motion of Gabi's film -- thus the title. 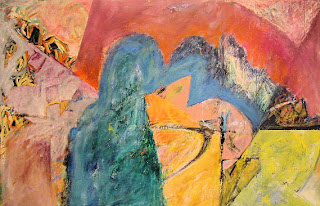