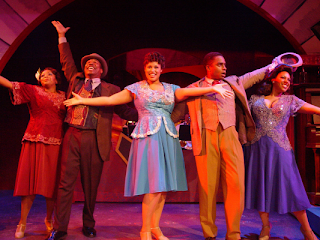 There are two fabulous shows running in Olympia right now -- Capital Playhouse’s “Ain’t Misbehavin’ and Harlequin Productions’ “The Ladies of the Camillias.” I reviewed “Ladies” in my weekly column in The News Tribune (published March 23 and posted on this blog -- see below), but I was unable to review “Ain’t Misbehavin’.”

That’s a shame, because it is great. So great, in fact, that you should stop reading right now and call the theater for tickets before they sell out (360-943-2744).

Surely everyone is familiar with the music; many of you may have seen it at Tacoma Little Theatre last year; and if you’re like me, you might even recall excerpts from the Broadway musical that aired on TV way back in 1978. If you're really lucky, you saw it on Broadway. But believe-you-me, you’ve never seen it quite like this. Capital Playhouse has pulled together the perfect cast, set and orchestra -- featuring the one and only Troy Arnold Fisher playing all those great Fats Waller tunes on an upright piano.

“Ain’t Misbehavin’” celebrates the life and times of Waller and beautifully recreates stylized versions of the Harlem night life beginning in the late 1920s.

Starring are Geoffrey Simmons, Troy Scarborough, Marlette Buchanan, Antonia Darlene and Marisa Kennedy. They are all wonderful singers and dancers whose outlandishly comical gestures and expressions make this show much more than just great music. Readers may recall that I picked Simmons as Best Actor in a Musical in my Critic’s Choice column last year for the same role in the TLT production. You may also remember him from Harlequin’s “The Twelfth Night of Stardust.” Darlene was also in “Stardust.” Scarborough is a professional actor from New York who appeared in Olympia in the national tour of “The Full Monty.”

Simmons brings the house down on “The Viper,” aka the reefer song. He slithers, he slides, his tongue grows to enormous proportions as he dreams about “a reefer five feet long.” Scarborough’s mouth seems to stretch from chin to forehead and his eyes roll up to heaven on the rockin’ comic tune “Your Feet’s Too Big.” All three of the women are good singers. Both Kennedy and Darlene have powerful voices and great range. Buchanan is more of a classical jazz lounge singer whose voice lends itself to sultry ballads.

The Capital Playhouse is a small space with an intimate feel. The set evokes a jazz era nightclub with an archway in the form of piano keys. In a cabaret setting such as this you feel like you're right there with the performers sharing a drink or a piano stool. Both the orchestra and the separate piano are on rolling platforms, an innovation that enhances the feeling of being right in the action. I guarantee you'll be humming these wonderful tunes for days to come.

Performances continue Wednesday through Saturday at 7:30 PM through April 7. Matinee performances are scheduled on March 25, and April 1. Tickets range in price from $21 to $31. Groups rates are available.