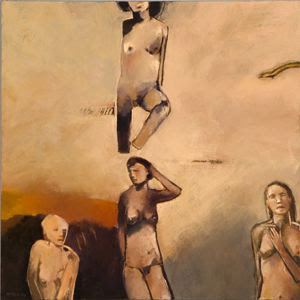 Published in the Volcano March 8, 2007
Pictured: 'Women With a Snake' by Mike Moran

The Mike Moran exhibition continues through March 16 at Evergreen Galleries, Gallery IV in Olympia. The survey of works created between 1982 and 2007 covers the time Moran has managed the ceramics studio and taught art at TESC and includes ceramic and concrete sculptures, paintings, drawings and prints.

Moran is celebrated for his expressive sculptures of female figures and animals, but I feel his paintings are better than his sculptures. His elongated and emaciated sculptures have been compared to the work of Alberto Giacometti, who I think has always been overrated. Giacometti is celebrated for expressing human pathos and alienation in his sculptural figures. They are undeniably expressive and dramatic as are Moran's figures and ceramic vessels (the latter of which look like Etruscan urns with painfully pinched human heads on top). But beyond his obvious dramatic flair and expressive surfaces, I don't believe Giacometti's sculptures live up to the hype. I have similar feelings about Moran's sculptures.

His paintings, on the other hand, combine emotional and aesthetic impact in ways the sculptures don't. The same can be said for his prints and for the three ceramic plates in this exhibition, which combine many of the best aspects of his paintings and sculptures.

All of Moran's paintings are of women - naked women, not nudes. Nudes are idealized, sanitized and objectified. Moran's women are naked and vulnerable. They are sexual but not sexy. They feel pain and carry heavy burdens. They feel real without being realistic. Most notably in his later paintings there is a feeling of living flesh over muscle and bone even though the modeling is not highly polished. They are not fully volumetric but seem to be caught in a no-man's-land between the flatness of the canvas and the rounded form of fully modeled figures. They seem to be trying to burst out of the flat canvas. In the latest paintings, the figures are all done in shades of brown with a fleshy under glow of pink. Their torsos are rounded, but their legs and arms are flattened out and often cut off abruptly.

In "Women With a Snake," three women stand along the bottom edge of the canvas. Their bodies verge on realism, but there are few details in their faces, and their arms and legs are sticklike. Floating in a brown sky above them is a woman whose face is cropped by the top edge of the canvas and whose arms and legs are chopped off. Her visual relationship to the shape of the canvas is emphasized by the harsh angle of her shoulder and the straight line from shoulder to hip, and the distribution of darks and lights is simply exquisite.

In all of Moran's two-dimensional work there is a sense of foreboding. They are dark and menacing, and almost devoid of color. Whereas the later paintings are all done in shades of brown, the earlier ones are mostly gray. The earlier ones have less modeling. The figures are more emblematic and iconic. Some of the best early works are prints. Particularly good ones include a small monotype called "Shadows" and an engraving called "Little Intimacies." There are also two excellent collages from the 1980s.

Among the best sculptures is a group of four horses that stand on a single stand but are labeled as separate pieces. The relationship between the four, their cast shadows and the subtle variations between similar forms make the grouping more attractive than I imagine any of the individual pieces would be alone.