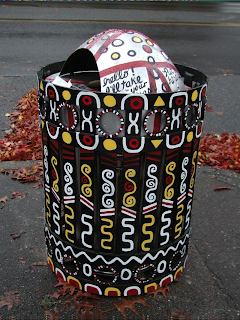 Claudia Riedener, Art Chair of the 6th Avenue Merchants Association, has great visions for 6th Avenue. She sees this somewhat commercial and somewhat funky neighborhood as a destination arena of community art, a haven for public art highlighted by (eventually, if all goes according to plan) a beautiful archway over the avenue.

But the first steps in seeing Riedener’s vision come to light were baby steps. The 6th Avenue project began with five decorated garbage cans, a bench, and a stack of car parts. Five local artists worked their magic on five street side garbage cans in a two-block area near Schuck’s Auto Supplies. Granted, these are just decorated garbage cans. No big deal. It’ll never rival the Olympic Sculpture Park in Seattle, but it could someday grow to rival the famous Chihuly bridge, which I think is terribly overrated anyway. And the decorations of these garbage cans are more than superficial. By way of contrast, the cat-themed decorations on Antique Row trash bins are sort of like appliqués on a teenager’s notebook. But the cans on the Ave are funkier and more creative. They’re not just painted. There is laying of tiles and welding of steel going on here. They are constructed with great care and pride of craftsmanship. Plus, they have imaginative titles, and the project itself has a punny name. It’s called the “Can Do” project.

C.J. Swanson’s "T-Town Indigenous" is a salute to Northwest Native American art, with repetitive symbols in a pictographic style in primary red, yellow and white. On top are words the artist describes as “friendly comments to the people sending the trash down the openings.”

Ann Meersman’s “Mandala” is a decorative but very formal design made up of colored tiles embedded in a concrete wrap around the can, with spray-painted decoration on the lid and interior (a fine finish to areas that normally won’t be seen being the mark of dedicated craftsmanship).

My favorite can is Jason Owens’ “The Space Between,” found objects and welded steel. Painted a bright red, this can is a tribute to industrialism, with its gears, springs and chains.

Nearby are two other works of art that are part of the Association’s continuing art project: Bill Bruza’s “Jim Smith Memorial Bench” and Doug Danstrom’s steel sculpture “Carrot.” Bruza’s bench is a tribute to fellow woodcarver Jim Smith. Danstrom’s sculpture is a massive and brightly colored column of welded auto parts that, fittingly, stand guard outside Walt's Auto Care Center. Danstrom, CEO of Walts, created this piece in collaboration with Mauricio Robalino.

Danstrom said: “Communities where art thrives are more vibrant, not for one day but for generations. There is definitely a government role in making this happen, but businesses can play a part. It is wonderful that the 6th Ave. Merchants Association has decided to add art to the Avenue. The foresight this shows is great and as time passes, so will the benefits to the businesses and their patrons.”

Riedener said: “I am happy that the Merchants Association has put major efforts behind the idea of public art on the Avenue. We have commissioned seven pieces by local artists in 2006 and all are installed. I am looking forward to another year and more public art done by local artists. We are ready with funding and ideas and are working with some local educational institutions for work on bigger projects for 2007. Keep your eyes open for more art to appear on the Ave. And if you are a Tacoma artist, watch for more calls for work on the list-serve.”

If the amount and quality of work added to the project in ’07 matches or betters ’06, then we really have something worthwhile to look forward to.
Posted by Alec Clayton at 10:45 AM

In the interest of accuracy; "Carrot" the sculpture located at 6th and Cedar in Tacoma was created by Mauricio Robalino and Doug Danstrom. The artist who was commissioned for the project and who came up with the idea of the stacked wheels, bent exhaust pipes and radiator fans is Mauricio Robalino. Doug Danstrom of Walt's was a fantastic partner in creating this piece. He provided the parts, welded and assembled them and paid for the powder coating. The 6th Avenue Business Association paid for the building permit and a modest honorarium for the artist. Thank you; Mauricio Robalino