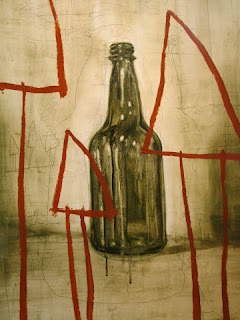 This is the good stuff. Portland artist Jason Greene’s paintings of bottles and jars and bags at the new Black Front Gallery in Olympia. The show is called “Contain” because all of the paintings are of containers of one sort or another. But what these forms contain is virtuoso painting and bottled-up emotion. Go ahead and groan.

“These generic forms hold my attention,” the artist writes in a statement. “As I observe common objects through painting, they begin to transcend their function. They provoke memories and experiences. The object itself becomes a symbol of human existence, and the paint helps preserve the moment, idea or emotion.”
That’s a lot of stuff for empty bottles to contain.

The most outstanding of these are the two large bottle paintings on the back wall of the gallery. These are approximately eight feet tall and four feet wide. Each is a painting of a single bottle painted with drippy thin paint on a background of thick white paint. These have an iconic presence reminiscent of Warhol’s soup cans and Thiebeaud’s pastries of the early ‘60s. They are monumental in scale and concept. Two similar but slightly smaller paintings of jars are nicely done but lack the impact of these two bottle paintings -- a good illustration of the impact scale can have on a painting.

A group of smaller paintings in a long, horizontal format deals with a different set of compositional concerns, the repetition of similar forms across a flat expanse of space. There are three paintings in this series, hung one above the other. On top is a line of five brown bottles, in the middle are four clear plastic baggies, and the bottom painting shows four brown paper bags. Whereas the larger paintings are all about the drips and smears and smatterings of wet-on-wet paint, these are all about placement in space. In the top and bottom paintings of this group, dark forms march against a stark white ground. In the middle painting we have a delicate interplay of clear on white, with subtle crinkles and cast shadows (there are no shadows in the top and bottom ones).

There is also a group of very small paintings, perhaps six inches square, which I suspect were included because they could sell cheaply. Two or three of them had already been sold when I saw the show. Compared to the other works, these paintings are mildly decorative.

Another interesting group combines one or more line drawing techniques with paintings of containers. There are nine of these, five on one wall that are similar in technique, and four on the opposite wall that are somewhat different. The group of five shows containers on shelves with atmospheric backgrounds. Overlapping these are very crude, child-like line drawings of what appear to be insects, and a network of finer and more sophisticated line work that often repeats the form of the containers in a deliberate kind of pentimente. On the opposite wall are four similar paintings but with slight differences. The heavier line drawings that overlap the containers are in color (in the first-mentioned group they were black), and they are blockier. They look something like a child’s rendition of trees and houses. Most of these have a clunky look and the color stands out too much. The ones on the other wall, I believe, are much better -- with one exception. That exception is a painting titled “Growth,” which is used on the show’s invitations. In this painting, three decidedly different ways of drawing and painting come together in beautiful harmony.

Black Front Gallery is located at 106 4th Ave. E, downtown Olympia. They're open Thursday through Saturday from 11 a.m. to 7 p.m.
Posted by Alec Clayton at 2:24 PM