Here's a fun thing to do on a cold night 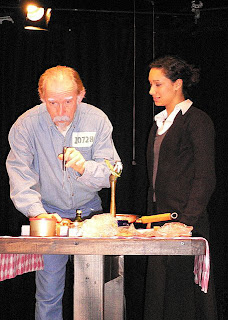 I like my job. It gives me the opportunity to see plays on an average of once a week. Not bad, huh? Still, there are some good plays I don't get to review. One in particular I was hoping to review but can't is Sam Shepard & Joseph Chaikin's "When the World Was Green" opening tonight at Olympia Little Theater.

It should be good. I don't think Sam Shepard's ever written anything that wasn't. Plus, Dennis Rolly's in it. He's always entertaining.

Here's a copy of the press release:

This play, written for the 1996 Atlanta Olympics Arts Festival, merges the best of Shepard's lyrical and meaningful language, with Chaikin's gift for characterization in a most unusual, and beautiful, one-act play.

"When the World was Green" has only two characters, an old man who was once a superb chef, and a young woman who comes to interview him in prison where he has been locked up after poisoning a man. Yet, their eight conversations, in which both characters recall incidents from their childhoods, link together to form a tender narrative of regret, loss, and revenge and maybe even hope.

The director, Tim Samland, says, "It is about Bosnia and Belfast and New Orleans, about the miraculous perfection of well-cooked food, and about how very much and how very little it takes to make theater sing."

"I'm still obsessed with this idea that words are pictures," Shepard has said, "and that even momentarily they can wrap the listener up in a visual world without having to commit themselves to revealing any other meaning. The sounds and rhythms seem to support these images and bring feeling into it.”

This play says more, with language and gesture, about hope for the world in which we live than all the politicians in the world.

For more information call Olympia Little Theatre at 360-786-9484, or www.olympialittletheater.org.

Pictured: Dennis Rolly and Samantha Chung in "When the World Was Green"
Posted by Alec Clayton at 11:24 AM