Published in The Weekly Volcano, Nov. 27, 2019
by Alec Clayton
“An Iliad” by Lisa Peterson and Denis O'Hare, not to be confused with “The Iliad” by Homer, is a one-person, one-act play, and it is as powerful and as intense as anything you’re likely to see this year. Peterson and O’Hare’s “An Iliad” will be performed two nights only in December at Olympia Family Theatre, starring Scott Douglas as The Poet with musical accompaniment by Nancy Curtis as The Muse on flute and other instruments, directed by James O’Barr.
Loosely based on “The Iliad” translated by Robert Fables, “An Iliad” tells the tale of a small part of the Trojan War with all the gods and warriors including Agamemnon, Achilles, King Priam, Paris and Menelaus―complete with great acts of heroism and copious bloodshed (but no actual or even stage blood.) The scenes of war are told by the Poet and mercifully not acted out. 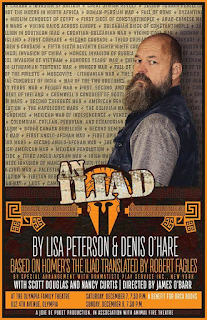 An Iliad combines the classic hexameter verse of Homer’s epic poem with modern speech, and tells the story of Agamemnon’s battle with Achilles and Achilles’ battle with Hector. And it tells much more than that. It tells the tales of every war ever fought. The gods have forced The Poet (ostensibly Homer) to sing the story of the war endlessly down through the ages. Douglas as The Poet looks tired and angry. He’s dressed like a veteran of some modern war, perhaps Iraq. At one point early in the play he says:
Fighters from Coronea, Haleartus deep in meadows,
And men who held Platae and lived in Glisas,
Men who held the rough-hewn gates of Lower Thebes,
On-kee-stus the holy, Poseidon’s sun-filled grove,
Men from the town of Arne green with vineyards . . .
And suddenly he pauses and then says:
Ah, that’s right, you don’t know any of these places . . . and many of you, unless you’re old enough the remember your war in Vietnam, don’t know about registration and the draft, and when your name came up, you had to go . . . but these names—these names mean something to me. I knew these boys . . . The point is, it’s like, on all these ships, are boys called up from every small town in Ohio.
Fortunately, I got to see a preview performance done for Lauren Love’s theater class at South Puget Sound Community College, performed in the black box theater with no set, no lighting or sound effects, no orchestra, but only Douglas telling the age-old and ever-new tale with Curtis as the muse sitting on a stool playing her flute. Nothing was needed beyond Douglas’s voice and his powerful expression of emotion as he talks about war and love and heroism throughout the ages. The writing is brilliant, and Douglas’s acting is mesmerizing. It is a powerful and exhausting hour and a half.
For Douglas, it is an acting tour de force and a monumental challenge as he is faced with a huge memorization load and has to assume many personas and voices including gods and mortals, male and female: Achilles, Agamemnon, Hector, Andromache, Hecuba and more.
An Iliad will be performed Dec. 7 and 8 at Olympia Family Theatre. The Saturday show is a fundraiser for Orca Books, which is in the process of transitioning to a multi-stakeholder, member co-op business. The Sunday show is a fundraiser for Animal Fire Theatre.
An Iliad
7:30 p.m. Saturday=Sunday, December 7-8
Olympia Family Theatre, 612 4th Ave E, Olympia
$25 at the door (Sunday show suggested donation)