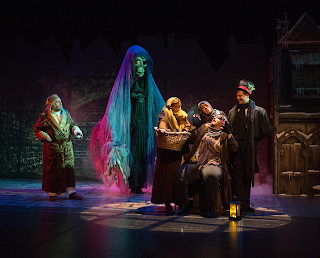 Here it comes again: Scrooge, Tiny Tim and the Christmas ghosts, as Tacoma Arts Live presents two performances of a new stage adaptation of Charles Dicken’s A Christmas Carol on December 21, 2019 at 3:00 and 7:30 p.m. at Tacoma’s historic Pantages Theater.

This brand new, original production of A Christmas Carol is adapted, directed, and performed by award-winning theater veteran Scott H. Severance who  is accredited with a long list of productions throughout his 40 year career, including Oscar Madison in The Odd Couple and a role in the 2005 20th Century Fox film Fever Pitch.

Severance wrote the adaptation, directs the show and stars as the miserly Scrooge in this annual production, now in its 6th year. "Our goal is always to tell this classic well-known story in a way that audiences have never seen before,” Severance says. “Ours is a traditional version to be sure, but it may be funnier, scarier, and more spiritual than folks would commonly expect. Lots of music, puppetry, and fully realized emotional arcs throughout. Scrooge is not the villian, he is, in fact, the hero."