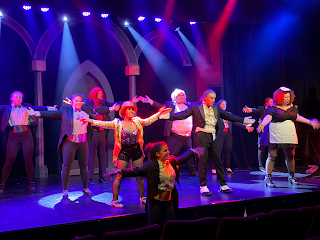 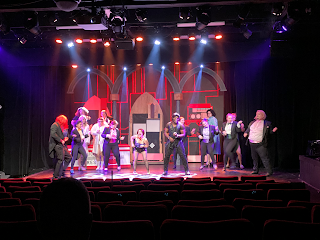 America’s favorite cult classic musical, The Rocky Horror Show, is rocking the stage at Auburn Avenue Theater. Since the early 1970s, audiences have been showing up in droves for stage and screen versions of Rocky Horror, often in costume and prepared to open umbrellas, throw rice and shout lines at the actors. The show itself parodies such characters as Frankenstein and Dracula and makes fun of bad horror movies in general as nerdy couple Brad (Hunter Roy) and Janet (Cami Werden) knock on the door of a dark and threatening castle and are welcomed by the outrageous transvestite Dr. Frank-N-Furter (Jordan Melin).

In Frank N Furter’s creepy home, Brad and Janet meet a houseful of wild characters, including a rocking biker and a creepy butler. “With a bit of a mind flip; You're into the time slip; And nothing can ever be the same…”). From there on it is all campy rock and roll and sexy humor.

The Auburn Community Players’ production is directed by Chris Serface, longtime musical theater actor and director and Artistic Director of Tacoma Musical Playhouse. “Rocky Horror has always been a favorite of mine from the first time I saw it when I was in high school,” Serface says. “I've now been privileged enough to have acted in it and directed it before and have always had a blast. This time around has been even more fun. The creative team and cast have put their heart into this project, and it shows. Rocky is sometimes overlooked as a serious show because of its cult status. The message of acceptance, individuality, and love is clear when you listen to the lyrics and text.”

Serface says, “I'm a Rocky purist and love the vision that Richard O'Brien created with this show. Come dressed up and ready to talk back to the show, because the audience is truly a part of the story.”

Brynne Geiszler plays Magenta, the maid. Geiszler has a BFA in Theater from Cornish College of the Arts. You can see her next in Broadway Olympia’s production of Songs For A New World this November. Geizler says, “Rocky has always had a special place in my heart. This is my fourth time performing in Rocky and each time the experience has been unique in its own way. This is my second time playing Magenta and I continue to learn new things about the character and show. I think the show itself is amazing because at its core when you strip away the camp and the sex, it's about being unabashedly true to yourself. But of course why would we want to strip away the camp and the sex, it's the best part! This cast has been incredible to work with. We've become a tight knit family and I am floored every day that I get to share the stage with these talented people.”

Melin says playing Frank N Furter is “an absolutely blast. The show makes you transcend onto another level you never thought possible. There is not another show I know of that allows and expects the audience to take such a huge part of it by yelling some of the most obscene comments, and we as a cast relish in them. It heightens the experience for all of us and creates a sort of freaky-bond.” Melin has performed in many theaters in the Pacific Northwest and has toured throughout the state and in England.

Audience participation kits will be available for purchase at the performance. There will be no outside participation items allowed in the auditorium.