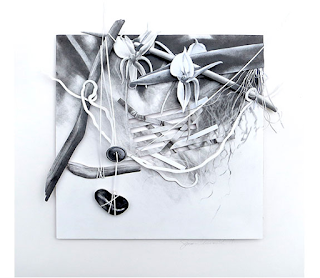 A warm and welcoming glow washes over you as you step into the gallery at Childhood’s End. It’s not just that the art on display is good, which it is. It’s the spacing of the art and the dominant colors that flow wavelike from painting to painting from the warm gray of Susan Aurand’s graphite drawings to the brown tones of her constructed paintings to the violet and blue and hot orange of Mary McCann’s paintings as they circle the gallery walls, and it’s the way Aurand’s and McCann’s artworks complement one another.
Aurand’s “Thickets and Tangles” series is her newest work. Eight pieces from the series are included, each the same size, approximately 16 by 12 inches, and drawn with graphite on paper. Each is of a tangle of sticks, twigs, vines and flowers tangled together like pieces of a bird’s nest, and on top and inside of the tangles are such objects as eggs, feathers and pebbles. Most of the parts are collaged onto a graphite drawing, some flat against the surface and some suspended in front; there is physical depth of close to an inch. And each collaged element is itself a drawing on paper done by Aurand and precisely cut and pasted so there’s an enticing kind of puzzle at work: what is drawn and what is cut and pasted, and it turns out that everything seems to be both. With cast shadows. But are they actual shadows or drawn shadows? It is impossible to tell. The unifying element (and the thing that makes these works so stunning) is the soft and smooth shading in tones of gray.
From these we go to a group of six earlier works from Aurand’s “Ways of Rising Up” series. In this series, Aurand paints and assembles wood, glass, metal and various objects to create landscape-based imagery that is also like an apothecary’s collection of medicine jars, tubes, rocks, feathers and eggs, including mysterious powders in miniature jars and butterfly wings, all of which sit on shelves or are suspended in front of delicately painted natural forms with stormy clouds and brilliant sunbursts. The construction and the painting are both precise and smooth. The dominant color scheme is based on variations on sienna. These constructed paintings are mysterious, intriguing and finely crafted.

And now we come to McCann’s paintings of craggy mountain ranges and brilliant skies. There are a dozen of these, each in a style well known to anyone familiar with McCann’s work. Her colors are vibrant, predominantly bright blues and orange and earth tones. The faces of mountains and cliffs look to be sculpted as she drags heavy paint across the surface. In one painting in particular, “Dry Falls,” the dark edges around a flat swath of gray-blue creates such an illusion of depth as to appear to be a strip of paper painted and accordion folded and collaged to the surface.
The only painting that departs from the heavy impasto is “Windgate Formation,” in which the paint is softly blended. In this one, receding and converging lines in the foreground create the impression of a filmed image with a fast zoom.
The titles indicate that each painting is of a particular place, but recognizing the places is of secondary importance to the wonder of her paint application and color uses.
Visit Childhood’s End to take in this show. You’ll come away feeling better.
Susan Aurand and Mary McCann, 10 a.m. to 6 p.m. Monday-Saturday, 11 a.m. to 5 p.m., Sunday, through April 20, Childhood’s End Gallery, 222 Fourth Ave. W, Olympia, 360.943.3724.