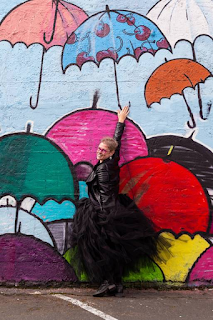 The Tacoma Arts Commission has announced the selection of Abby E. Murray as Tacoma's 2019-2021 Poet Laureate. Over the next two years, Murray will participate in and host public poetry readings, workshops and other community events to advance the literary arts in Tacoma.
“My admiration for the literary arts community in Tacoma is as genuine as my love of home,” said Murray. “As a military spouse and poet who's spent a lot of time thinking about what it means to belong, I want to increase the reach and impact, geographically and socially, of poetry as a survival skill. We are a fragmented nation. I want to help weave us together, one poem at a time.”

As a wrap-up of National Poetry Month, 2017-2019 Tacoma Poet Laureate Kellie Richardson and the Tacoma Arts Commission will host Pass the Torch, a poetry and music event at which Murray will officially be awarded the title. The free, public event will be held Wednesday, April 24, from 5:30 – 7:30 p.m., at Tacoma Arts Live, Studio 3 (901 Broadway). Featured poets will include Murray, Richardson, 2015-2017 Tacoma Poet Laureate Thy Nguyễn, and emerging poet and University of Washington Tacoma student Byron Gaines II. Light refreshments will be served and attendees will have an opportunity to participate in a hands-on project.
About Abby E. Murray
Abby E. Murray is a poet, instructor, editor and activist. She was born in Puyallup, Wash. but spent years moving from state to state with her husband, who is still active duty in the U.S. Army. She recently returned to the Tacoma area when he was assigned to Joint Base Lewis-McChord. She earned a bachelor of arts degree at Seattle University, a master of fine arts degree at Pacific University and a doctorate degree at Binghamton University. She also taught creative writing at universities and community colleges in Colorado, Georgia, Washington and New York.

Because Murray identifies as a conflicted pacifist indirectly impacted by military service, her poetry, essays and community endeavors often focus on the lasting ramifications of violent conflict beyond the combat zone. She is the editor of Collateral, a literary journal that publishes creative work exploring this experience, and is passionate about creating platforms to amplify voices of marginalized writers and artists. War reaches into all our lives, she says, which is why she teaches poetry and writing workshops to the public and military families, trauma survivors, and the undocumented and detained. She also teaches creative writing at Tacoma School of the Arts and argumentation to army colonels on fellowship to the University of Washington from the U.S. Army War College in Carlisle, Pennsylvania.

Murray has several chapbooks published, including Quick Draw: Poems from a Soldier’s Wife (2012) and How to be Married After Iraq (2018), and her first full-length collection of poems, Hail and Farewell, recently won the Perugia Press Poetry Prize and will be released in fall 2019. She considers her poetry to be her most tested and trusted survival skill.