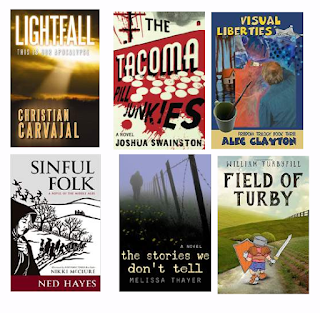 Last night I went to a book launch party for William Turbyfill’s Field of Turby at B Sharp Coffee House in Tacoma. Graciously, Turbyfill honored friends and fellow writers Christian Carvajal, Jack Cameron and Melissa Thayer by inviting them to read from their own works, and then he read a few selections from his newly published book—his first, and hopefully the first of many. It was a wonderful event. It is good to see locals coming out to support local writers. There are many more outstanding local writers than I can begin to enumerate. Most of them are published by independent, small-budget publishers, or are self-published. There used to be a stigma to that, but not so much anymore. Despite not being well known beyond friends and relatives, many of these local, independently published authors are just as good as, and often better than, more famous authors whose books sell in the millions.
The difference is Random House and HarperCollins and Simon&Schuster can spend huge fortunes on advertising and promotion; they can provide every bookstore in America with return-guaranteed books; they can send their authors on worldwide book tours. (I’m not about to spend a thousand dollars to fly across country for a book reading where I might sell half a dozen books.) Marketing is impossible beyond readings in local bookstores (and only independent bookstores like Kings Books and Orca will even put these books on their shelves) and at events such as Creative Colloquy.
Steven King’s latest novel, The Bazaar of Bad Dreams has 767 customer reviews on amazon.com. Field of Turby has seven, which is phenomenal for an independently published book that’s been out such a short time. My latest book has four. The most I’ve ever gotten for any book so far has been 19.
Like your local food co-op and neighborhood schools, local writers need your support. Please buy their books and read them. But don’t just read them. Post customer reviews on amazon and Goodreads, and recommend them on Facebook. These reviews help more than you can imagine, and they’re not hard to write. They don’t have to be polished or even skillfully written. Just write what you think, and be honest. If there are things about the book you don’t like, say it. If you just gush about how great it is, readers will sense you’re being dishonest; they might even suspect you were paid to write a glowing review (that does happen, and amazon watches for it and will refuse to publish reviews they suspect are dishonest).
Here are some local authors in the Olympia-Tacoma area whose books I recommend, plus a couple from other parts of the country whose books are outstanding and who could use your support:
William Turbyfill
Melissa Thayer
Jack Cameron
Ned Hayes
Christian Carvajal
Ricker Winsor
S.R. Martin Jr.
Jack Butler
Larry Johnson
Joshua Swainston
Ruth Tiger
Dianne Kozdrey Bunnell