Published in the Weekly Volcano, June 4, 2015
Watching Agamemnon at Dukesbay Theater opening night was a totally immersive theatrical experience. This is the way theater was in the beginning when many theatrical traditions still in common use were first invented, and it plays as well in 21st century Tacoma as it must have in Greece 2,400 years ago.
The set by Matthew Philbrook and Brittany Porter is thoroughly modern and gorgeous; the movement of the actors — most notably the chorus — is highly stylized like a ballet set to words, and those words are plain spoken and easily understood. The drama is so intense it’s a wonder audience members did not flee screaming, especially taking into account the intimate seating where actors practically touch some of the audience. 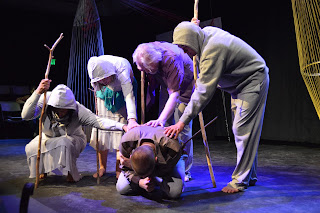 The story is set at the end of the Trojan wars. Greek King Agamemnon (played with gravitas by Brian Wayne Jansen) has triumphed in war and is on his way home. He has sacrificed his daughter, Iphigenia (J. Carrie Ivory) to the gods, an atrocity which his wife, Clytemnestra (Samantha A. Camp) can never forgive, and he is bringing home with him a slave concubine, Cassandra (also played by Ivory), who was captured in Troy. She is also a prophetess who can see the future.
In a Greek tradition that has endured up until modern times, much of the story is told by the chorus. Every cast member is in the chorus at some point and each steps out of the chorus to play various characters. Even the lead characters, Agamemnon and Clytemnestra, take their turns in the chorus, and Jansen even takes a turn as an unnamed guard.
The abstract patterns of movement by all of the actors in and around the equally abstract set is choreographed by Katie Lappier and creates an otherworldly mood suitable to a time in which gods interacted in the lives of men and women. There is chanting and poetry from the chorus and both Ivory and Glenn Guhr, who plays Menelaus and Aegisthus, sing separate funeral laments. Ghur’s voice is deep and beautifully controlled while Ivory’s is hauntingly sad and lovely.
Jansen’s and Camp’s performances are almost indescribably intense. Jansen, a large man who somehow looks even bigger than he is in this performance, is magisterial and commanding. It is believable that his subjects would look to him as to a god. His expressions of grief and pain are overwhelming. I first saw Jansen in a couple of comedies, Picasso at the Lapin Agile and Take Me Out, and thought he was a natural comedian. And then I discovered upon seeing him in Titus Andronicus (in which he was also paired with Camp) that he can be equally adept at high drama. Camp is also amazing. She begins as likeable and charming but devolves into a hideous person in an acting stint that is spectacular.
No makeup artist is listed in the program. I suspect the actors did their own.  Clytemnestra’s blood smeared face and the black makeup around Agamemnon’s eyes are simple and highly effective.
The costumes are clearly put together with little or no budget and almost succeed in making contemporary clothing look like clothes worn in ancient Greece. The light gray hoodies worn by the chorus and the women’s gray skirts create an overall ashen look of mystery.
The set is a modern art installation of brightly colored twine in cones of light that flow from platforms on the floor to high on the wall. They are strikingly minimalist and highly appropriate to the stylized manner of presentation.
Agamemnon is not an easy play to watch. It looks into betrayal and murder and deals unflinchingly with difficult questions or loyalty and justice without providing easy answers. The drama is heavy and unrelenting. But anyone who appreciates fine art should find it fascinating.
Congratulations to the cast and crew and especially director Kathryn Philbrook for a job well done.
Agamemnon,  Friday.-Saturday, 7:30 p.m., Sunday, 2 p.m. through June 14, Dukesbay Theater in the Merlino Arts Center, 508 South 6th Ave., Tacoma, $15, $10 students/seniors, http://agamemnon.brownpapertickets.com/