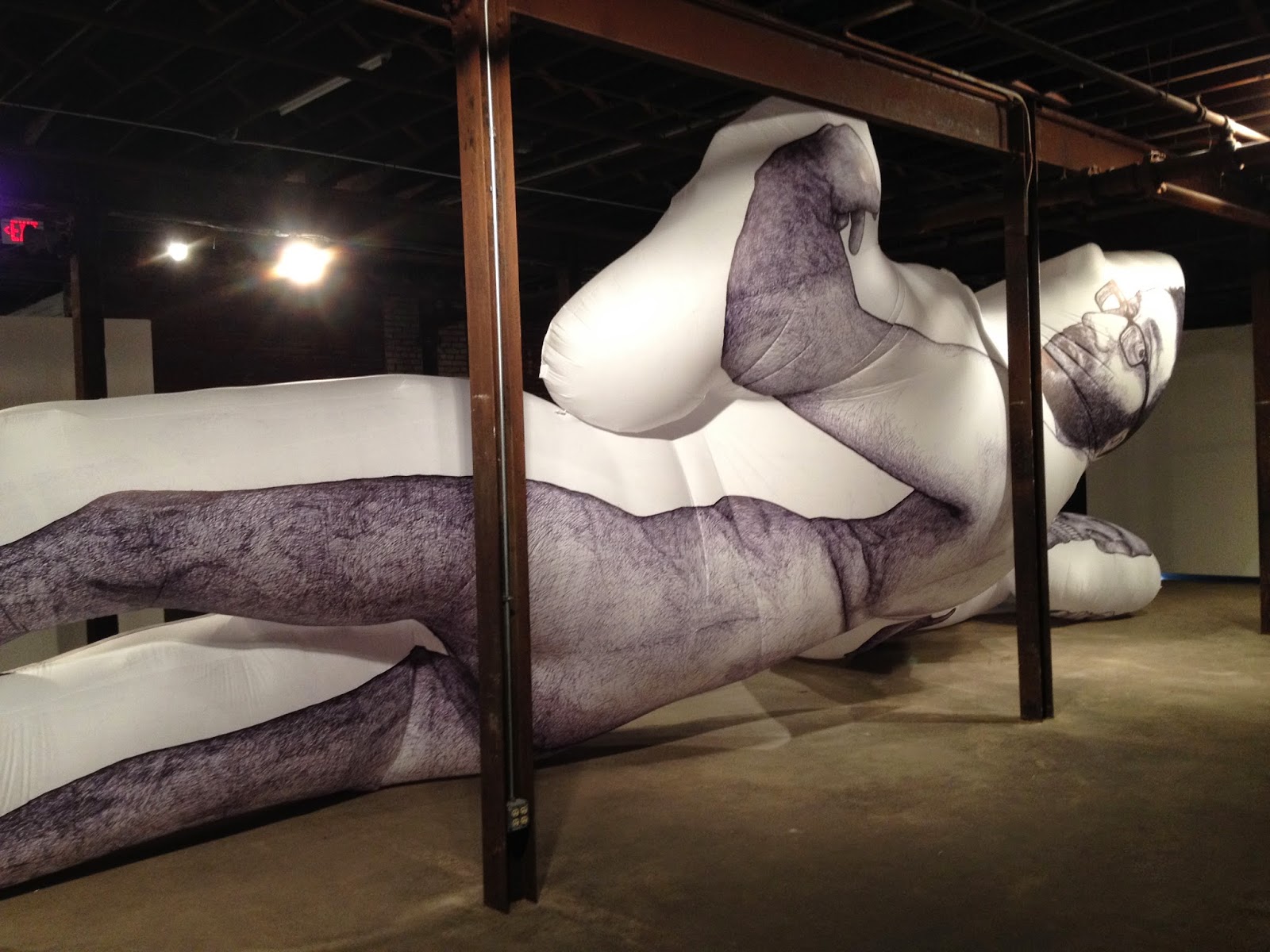 This must be seen.

New York artist Benjamin Enterner’s installation “Ego Sum” from the Contemporary Arts Center in Las Vegas has now traveled to Olympia and can be seen at the gallery at South Puget Sound Community College. This new version of the show is called “Mining the Ego,” and like his installation in Las Vegas, it fills the gallery with monstrous figures drawn with black markers on blow-up vinyl sculptures that overwhelm the gallery space.

Entner draws himself in less-than-idealized and unflattering  poses similar to those of classical Greco-Roman and Renaissance sculpture, creating an “awkward dialogue between his contemporary parodies and the historical works … that questions and challenges perspectives of beauty, proportion, and the idealized man.”

There is a kitsch-pop element to these soft sculptures, but also something deadly serious; they are like the love child of sculptures by Jeff Koons and etchings by Albrecht Dürer. The centerpiece of the show is a self-portrait with the subject lying on his side. His head is near the entrance to the gallery and his feet almost touch the back wall, and the girth of the figure reaches almost floor to ceiling. The drawing is semi-realistic with dense crosshatch shading. All of his figures are distorted in a funhouse mirror sort of way, not so much because of the way they are drawn but because the blowup vinyl forms they are drawn upon bend and twist in odd ways. Bodies twist and turn, and arms and legs taper off and swell up. Hands and feet tend to be larger than is realistic, and it is hard to tell if they were actually drawn that way or not. The viewer has to walk around this figure, and from no single point of view can it be seen head-to-toe. Parts of the figure go over the hill of itself and vanish from sight.

From the front of the large centerpiece figure, called “Colossus,”  we see Entner’s face, bearded and with glasses, facing the viewer. When the viewer walks around to see him from the backside, his face is still facing the viewer — turned to look over one shoulder in a realistic way but appearing at first glance like Linda Blair’s spinning head in “he Exorcist.”

Near the entrance is a larger-than-life bust of Entner on a Roman style pedestal. Near it is another full figure, about life size, standing by a ladder and juggling a smaller version of himself. There’s another smaller one that is like one of those kids’ punching bags that you hit and it falls down and pops back up. And then there’s one with Entner in an identical pose as Michelangelo’s “David.” But he is not as beautiful as David. He has an average body covered with prickly black hair.

This is a fascinating show that absolutely must be seen. Even people who care nothing for art will be blown away by it, and people who know something of art history will be intrigued by his inventiveness, skill and art-historical references.