The Whirlwind at Hands On Children’s Museum 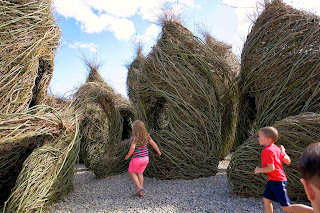 There’s a maze in a whirlwind in front of the Hands On Children’s Museum in Olympia. Children love it. And so do art lovers, because it is a large-scale work of art by internationally renowned sculptor Patrick Daugherty.

South Sound art lovers will recall Daugherty’s delightful and amazing “Call of the Wild,” an installation in the form of a giant teapot and pitcher made of twisted twigs hanging over and floating in the water feature in front of the Museum of Glass where Martin Blank’s “Fluent Steps” stands today. Daugherty’s piece was installed in the reflective pool for the opening of the museum in 2002 and remained in place for a full year.

Board members at Hands On Children’s Museum had seen Daugherty’s “Call of the Wild” and were so impressed with it that they called on him when they were planning the new museum near the Port of Olympia. Daugherty’s installation at Hands On is the centerpiece and focal point of the Outdoor Discovery Center in front of the museum, which is still being expanded. When completed it will be a half-acre outdoor space designed to encourage children to hike the Trike Loop, dig into Mud Pie Play, enjoy the Driftwood Fort Area and the Children’s Garden.
The new piece, called “Muskrat Ramble,” is a maze of towers and arches and winding circular paths that children can climb and crawl and walk through. For children it is play; for adults it is a powerful work of art. The swirling motion of the twigs — mostly bendable maple vines and some elm and cherry — that make up towers and arches appear to be caught up in a powerful whirlwind.

The materials were gathered onsite at the Port Blakely Tree Farms in Delphi, Wash., and were donated to the museum. The artist employed more than 40 volunteers, including children and museum staff, to weave the sticks together according to his vision. The work took more than two weeks, from Aug. 1-16. 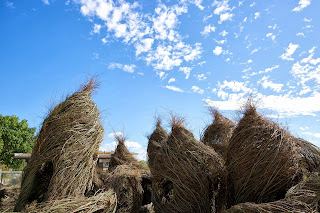 “The idea of cursive handwriting was a starting point for this sculpture because I thought of children practicing its looping lines and learning to connect letters into words,” Daugherty said. “I used a cursive base for the footprint, drawing it on the ground and then letting those curvy lines suggest where the sculpture should go.  We also needed some height in the form of towers to announce the work so, while the walls run around the outside as part of a continuous loop, they sometimes rise up to stir things up and suggest flying, spinning tops, somewhat like the amorphous shapes that vines sometimes make in the wild when they overtake trees.

“When designing with children in mind, I plan for lots of movement and put emphasis on doors and windows and hidey-holes that are scaled to provide a sense of intimacy for children. Kids are art connoisseurs in their own right and they enjoy visual excitement as well.

“I have come to believe that one's childhood shapes a sculptor's choice of his or her materials. For me it was growing up in the woodlands of North Carolina, which are overgrown with small trees and where forests are a tangle of intersecting natural lines. In fact, I have always loved the drawing quality of the winter landscape in which one might imagine fantasy shapes drawn into the upper branches of trees. For me, tree branches and saplings also have the rich associations with childhood play and with the shelters built by animals. Picking up a stick and bending it seems to give me big ideas.  I think this ‘know how’ is one that every human carries as a legacy from our hunting and gathering past. When I turned to sculpture in the early ’80s, I had to rediscover what birds already knew: sticks have an infuriating tendency to entangle with each other. It is this simple tangle that holds my work together.”

Daugherty’s sculptures are monumental in scale and site-specific. Over the last 30 years, he has built more than 230 such works, which can be seen in museums, on university campuses and other public sites all over the world.


When “Call of the Wild,” was installed at Museum of Glass a museum spokesperson said, “Patrick Dougherty's work references architecture, sculpture and the landscape as well as concepts of shelter. … His sculptures are all site-specific and created from branches and cut saplings, which he integrates into buildings and natural structures.”

His “Muskrat Ramble,” at Hands On is expected to last for about 3 years.

The still new and growing museum features eight galleries with interactive displays on such themes as “Our Puget Sound,” “Our Fabulous Forests” and the “Arts and Parts Studio.” There are fire engines and a police car and things to climb in and slide down; nearly everything is interactive, designed for learning and play. And there’s a café and gift shop.

The Museum will participate in the Olympia Fall Arts Walk on October 4-5. The sculpture, as well as the Museum itself, will be open for visitors to tour between 5-9pm for free. The museum is open seven days a week including late hours on Thursdays and free admission every first Friday.