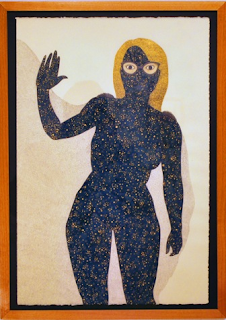 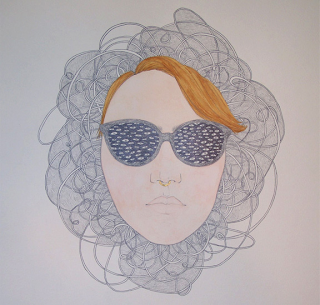 Meghan Mitchell’s drawings in the show “Hello” at Fulcrum Gallery are delightful. I could easily dismiss them as cute little drawings not really important as art, but I could just as easily dismiss the art of great graphic artists like Saul Steinberg and Jules Feiffer in the same way. I can see similarities between Mitchell’s drawings and some by Steinberg and Feiffer. I also see similarities in style to popular Tacoma artist Sean Alexander.

In this show there are only a handful of drawings in ink, graphite and pigment on paper. They are humorous, quirky, inventive and skillfully drawn. Mitchell’s drawing style is precise and highly controlled.
A wall statement describes the work as being “inspired by zines, comics, and certain trappings of childhood” and as “an exploration of one woman's quest to share her rich inner monologue and myriad selves.”

“Flight From Midgard” illustrates an ancient Norse legend and, simultaneously, makes fun of a contemporary myth held dear by certain religious groups: the rapture. Or does it celebrate the rapture? Perhaps that is up to the viewer to decide. According to Norse mythology, the bravest warriors are taken by Valkyries from Midgard (the land of men) to live in Asgard (land of the gods) in Valhalla. Mitchell’s drawing depicts a colorful tent. Scattered inside the tent are a man and a woman’s underwear, two booze bottles and a book. The couple has been whisked away, and left behind is a spiral of stardust rising to heaven. More to the point, “Raptured” depicts the same scene minus the tent. It is just a clump of clothes and the stardust. Both are lovely drawings.

Flanked on either side of “Raptured” are “Space Cadet” and “Green Thumb.” Both of these are silhouetted figures of women with patterns on their bodies which can be seen either as very tightly fit clothing or as patterns painted directly on their skin. Both have big eyes and glasses. “Space Cadet’s” skin is a field of stars in a dark blue sky; in
“Green Thumb” (subtitled “Creature from the Black Lagoon”) the woman’s skin is a field of grass. Both are strong graphic images that show otherworldly figures in a comic book fashion.

Other drawings in the show include a couple of anthropomorphized monkeys with big, black-rimmed glasses, and yet another drawing includes a tent similar to the one in “Flight From Midgard,” but in this instance the tent becomes a fantasy house.

And speaking of tents, there is an actual tent in the middle of the gallery that you can crawl into and play Nintendo games.