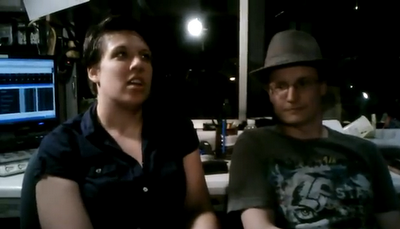 There are many degrees and types of intimacy, but it is rare to have experienced a theatrical performance as intimate as Love Letters at Lakewood Playhouse. And what a sweet and original concept: nine performances of the same two-person play, each performance by a different couple who, off stage, are actual lovers, spouses or partners.

Since it opened off-Broadway in 1989 Love Letters has traditionally been performed with revolving casts. The unique twist to the Lakewood Playhouse presentation is that each of the performing couples met and fell in love while working in theater.

As written by A.R. Gurney, the play is not to be “performed.” The couple is introduced. They sit side-by-side in chairs and read a series of letters to each other. Theater-goers will notice that no one is credited as director or costume designer. The only thing theatrical about the show is the lights come up at the beginning of each act and go down at the end. Otherwise it is just two characters reading letters written to one another over a lifetime. That sounds boring, but it is anything but. It is fascinating. It is one of the most personally engaging bits of theater I have ever witnessed.

The characters are Andrew Makepeace Ladd III and Melissa Gardner, a boy and girl who met in the second grade and whose first correspondences were notes passed back and forth in school, and who continued a relationship, mostly through letters, throughout their lives. They grow up. They experience the pangs and hopes and disappointments of puberty and adolescence and young adulthood. They go their separate ways, both physically and psychologically, yet keep getting back together mostly through the letters as they build careers and family and grow into middle age and old age.

Alex Smith and Jen Davis were Andrew and Melissa opening night. Smith is a South Puget Sound favorite who has performed in a slew of plays in Olympia and Tacoma, most recently turning in an amazing performance in A Funny Thing Happened on the Way to the Forum at Lakewood Playhouse. He has endeared himself to audiences primarily through wild physical comedy. In this show he is much more restrained physically, but his facial expressions offer a look into the soul of Andrew Ladd. Davis is not as well known to me. This was my first time to see her on stage, and according to a curtain speech by Playhouse Artistic Director John Munn it may be the last for quite some time, because she is leaving the area soon for California. I’m glad I got to see her in this show. She absolutely becomes Melissa Gardner, frustrated artist and lover.

The amazing thing about Smith and Davis’s performance is that they each seem to thoroughly inhabit their characters yet remain most definitely themselves. Smith has a favorite hat that he wears everywhere he goes, and he wears it throughout this performance as if saying, “Look folks, no costume. It’s just me.” Having gotten to know him a little over the past year I felt like I was watching Alex Smith be himself, opening his own heart for the world to see inside and revealing that Andrew was as real as Alex. That is what we call acting. I suspect everyone in the audience opening night felt the same way — privileged to be invited into their lives. I’m sure the experience will be much the same at each succeeding performance as audiences are given a chance to see many of their favorite actors perform this show, so this is one show that would be good to see more than once because it promises to be different each time.

Love Letters is sweet, poignant, funny and revealing. I not only recommend it, I recommend seeing as many performances as possible.

Video interviews with each of the couples at http://www.lakewoodplayhouse.org/