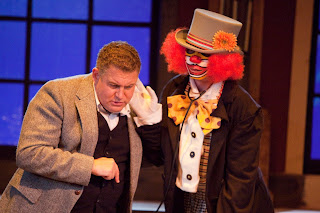 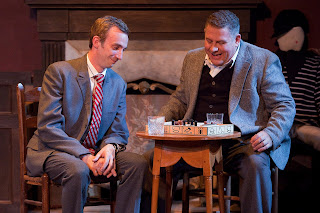 Pictured: Alan Wilkie as Andrew Wyke and Christian Doyle as Milo Tindle (in a clown suit). Photos by Dean Lapin.

“Sleuth” by Anthony Shaffer is much more than a mind-boggling mystery. It is a chess game of the mind with life-or-death consequences between two clever adversaries. In the Tacoma Little Theatre production directed by John Munn the adversaries are Alan Wilkie as Andrew Wyke and Christian Doyle as Milo Tindle.

While perusing the Internet for specific information on this play, I noticed many reviews of ”Sleuth” in other theaters carried a common theme: that bad acting had destroyed what was an excellent play when it premiered in London with Anthony Quayle and Keith Baxter in the lead roles and in the American the film version starring Laurence Olivier and Michael Caine.

This is a play that puts great demands on the lead actors. To be effective, Wyke has to be portrayed as lovable and intelligent with a mischievous streak. He has to dance on a tightrope between being likable and detestable -- not an easy task, but Wilkie does it so well that I didn’t question the duality of his character.

Tindle, on the other hand, has to play dumb and innocent but prove to be intelligent, and he has to master pratfalls that could seriously injure a less skilled actor. The way Tindle stumbles in clown feet, as a prime example, could easily devolve into stupidity. Those who saw Doyle in his recent role as Rosencrantz in “Rosencrantz & Guildenstern Are Dead” at Lakewood Playhouse know that he is more than capable of pulling off just such pratfalls, and he did. Buster Keaton couldn’t have done it any better.

Doyle and Wilkie have to carry the weight of the play. The other supporting actors’ roles are too miniscule to mention, with the exception of James C. Kennedy as Inspector Doppler. He is on stage for only a few minutes, but they are memorable minutes. According to the program, Kennedy has never before performed in the South Sound region. He is a professional actor from Los Angeles with an impressive biography. Here he interestingly plays a minor role that amounts to a cameo. Doppler is an old man who walks with a shuffle and can barely manage to climb steps, and he speaks in a monotone. Like Columbo from the old television series, he pretends to be slow-witted as a means of throwing people off guard. But his adversary in this case, Wyke, is more than a match for him.

Kennedy’s professionalism shows, but the local actors, Wilkie and Doyle, outshine him. His character is too one-dimensional and his flat delivery, while funny in small portions, would get boring if his time on stage were not so brief, whereas Wilkie and Doyle keep the audience on the edge of their seats wondering what they’re going to do next.

Set designer Blake R. York has created a rich country home with many fascinating details and Tracy Berryman has added props that augment both the mystery and comedy, helped by Gail Thomason’s special effects.

If you like whodunits with eccentric characters, a large heaping of humor and an almost endless array of surprise twists, by all means go to see “Sleuth” at Tacoma Little Theatre.