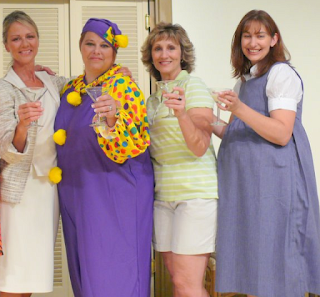 Published in The News Tribune / The Olympian, Sept. 17, 2010
Pictured, from left: Teresa Wall as Dinah, Christine Goode as Vernadette, Jennie Jenks as Sheree, and Kristina Cummins as Jeri Neal.
Photo by Toni Holm.

Prepare to laugh. And maybe even cry a little bit. “The Dixie Swimclub” at Olympia Little Theatre is a bittersweet Southern gothic comedy in the tradition of “Steel Magnolias” and “Crimes of the Heart.”

Writers Jessie Jones, Nicholas Hope and Jamie Wooten built their play around a tried-and-true literary device: revisiting the same characters over a lifetime. Five women, each with her unique eccentricities and all members of a championship college swim team, gather together every August in the same cottage on North Carolina’s Outer Banks.

The writers consistently carry the individual characters’ quirks and peculiarities throughout the years – consistent to the point of seeming contrived in some instances, such as Vernadette (Christine Goode) arriving every August with a new injury and immediately running to the bathroom, and Lexie’s (Maureen O’Neill) obsession with her appearance and the men in her life.

The five actors are just as consistent in portraying the uniqueness of these characters. They play them almost but not quite as caricatures of comedic types, but just when you think they’re going over the edge into absurdity, they bring them back down to the natural and believable. What’s really outstanding about all five characters, both in how they’re written and how they are portrayed by the actors in this production, is that we feel we know them. We all have sisters or aunts or cousins who are exactly like Lexie or Sheree or Dinah.

Sheree (Jennie Jenks) is the organizer who is obsessive about planning every little detail and who serves her friends snacks they can’t stomach. They throw them out the window or spit them out in a flower pot.

Dinah (Teresa Wall) is a sharp and sharp-witted lawyer who can successfully deal with everybody’s problems but her own.

Lexie keeps getting facelifts and breast augmentations and “just positively refuses to give in to age.”

Vernadette is plagued by bad luck but never loses her good spirits.

And finally there is Jeri Neal (Kristina Cummins), the nun who leaves the order and gets pregnant and faces life with a Pollyannaish attitude. She is simply delightful.

The humor is outstanding, and it is easy to sympathize with each of these women as life batters them like the storms that pound the Outer Banks.

My only criticism is that the Southern accents make it difficult to hear all of the dialogue – it takes most of the first act to get used to them – and the breaks between acts are awfully long and distracting as stagehands move props. Unfortunately this is something the audience just has to put up with because of the nature of the play and the arrangement of the stage area.