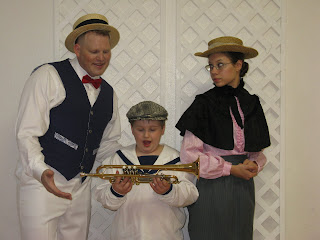 Published in the Olympian and The News Tribune, Aug. 20, 2010
Pictured from left: James Raasch as Professor Harold Hill, Andrew Knickerbocker as Winthrop and
Krista Curry as Marian in "The Music Man" at Paradise Theatre.Photo by Erin Lund

Meredith Willson’s (((CQ))) “The Music Man” is lighthearted family entertainment loaded with rousing music and clever lyrics. The current production at Paradise Theatre in Gig Harbor provides brief moments of wonderful performance but too many moments that are not quite up to snuff. Perusing the cast list in the program I see that most of them have only two or three community theater productions to their credit at most, so professional skill levels are not to be expected, and it shows on some of the smaller numbers and individual acting roles.

Jeff Richards’ direction, set and lighting design are commendable, and Vicki Richards’ costume design is nicely done. Her choreography is outstanding on some of the bigger production numbers involving the full cast – most notably on the opening song, “Rock Island,” the wonderful “Ya Got Trouble” and (best choreographed of all) “Marian the Librarian.”

I thoroughly enjoyed the men of the ensemble on “Rock Island” with its humorous repetition and fast jumps between singers practically jumping all over one another’s lines while rocking in time with the train. Kudos to the cast - the timing on this was excellent.

The rollicking theme song, “76 Trombones” was exuberant, and the opening night audience loved it when they marched throughout the auditorium.

Marcellus (Jeffrey Bassett) and the ensemble were delightful on “Shipoopi).

F. James Raasch in the demanding lead role of Professor Harold Hill was very good. He sings well and deports himself well on stage, commanding the attention the role demands.

Krista Curry as the love interest, Marian Paroo, is a good actor and has a lovely voice, but the choice to sing most of her songs in an operatic style did not work well.

The most enjoyable parts of the play were the songs of the barbershop quartet and the teen dancers. The quartet of James Koop, Howard Knickerbocker, David Smith and Eli Ghorley was outstanding. Their rendition of “Lida Rose” was the epitome of what a good turn-of-the-century barbershop quartet should be.

The parts that needed a lot more work were the ballet numbers by the ladies, most notably “Eulalie’s Ballet” and a long scene of people crossing a foot bridge that should have been shortened quite a bit. About the ballet: they were supposed to be bad; that was the intent. But when amateurs mock even more amateurish performers there is a fine line between being funny and appearing ridiculous, and I’m afraid they fell on the wrong side of that line.

It is a long play. Opening night we didn’t get out until after 11 p.m. because they started half an hour late at 8:30 after a period setting ice cream social with cast in costumes and free ice cream (donated by Ben & Jerry’s).


Note: My column for next week will be my annual Critic's Choice picks of the best in South Sound theater.
Posted by Alec Clayton at 10:48 AM