The fairer sex by Donald Cole and Francie Allen 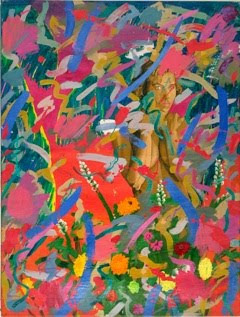 The Donald Cole and Francie Allen show "Women Concealed and Revealed" at Blue Heron Gallery is worth the drive and the ferry ride to Vashon Island.

I first became aware of Cole a few years back when I reviewed his show at ArtXchange in Seattle for another publication. I was tremendously impressed. Cole is a man that really grasps the art of painting. His images in that show were powerful and interesting in their abstract interpretation of ancient Asian calligraphy and symbolism and the objects he depicted lent themselves beautifully to his manner of manipulating color, shape and surface texture. His work at Blue Heron is not as strong. I get the feeling he was trying with these paintings and drawings to appeal to a wider audience.

Fitting with the theme of the show, these works are peekaboo images of women partially hidden under overall patterns of objects and shapes. One called "Flowers" stands out. There is a woman hiding behind bright flowers and red and blue squiggles of paint. The figure is realistic, the surface pattern looks like a Jasper Johns painting, and the way the two are interwoven with the woman almost vanishing is great.

On the other hand, there is a series called "Snake Woman," each of which pictures a naked woman striding forward in a jungle filled with snakes. These look corny and gimmicky, and the figures are clumsily drawn. There are also some interesting figure studies based on the "Venus of Willendorf" that show a variety of approaches to the same subject, and one wonderfully energetic drawing called "Earth Mother 1" that looks like a Jackson Pollack.

The best of his pictures are multi-layered and satisfying to look at despite the similarity in trickery to Bev Dolittle’s horribly slick and clichéd pictures of horses hidden amongst snow-laden trees. 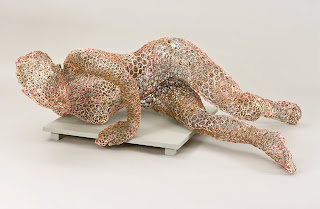 Allen is a sculptor. She does figures in chicken wire, many of which hang from the ceiling. They are empty, hollow, both literally and metaphorically, and are very graceful, simple and lifelike. Small features such as eyes, noses, knuckles, toes and nipples are either eliminated completely or severely simplified; and yet they are very realistic figures. There is a mysterious and ghostlike quality to these figures that reminds me of George Segal’s pop plaster sculptures. 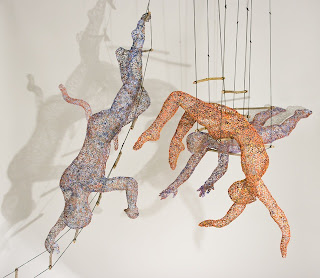 One of the best is a piece called "Odalisque." It is a simple and beautifully structured reclining figure in which you see a body within a body. Also fascinating are some with multiple figures hanging from wire and bamboo ladders like circus performers. The combination and see-through effect of the chicken wire and the ladders with overlapping figures is quite nice.

The one drawback to Allen’s work is that some of them are too pretty and the dancelike poses are too graceful. It’s like they are echoes of pretty people left behind. They are intriguing, but I wish some of them were echoes of plain people or old people or maybe even fat people.