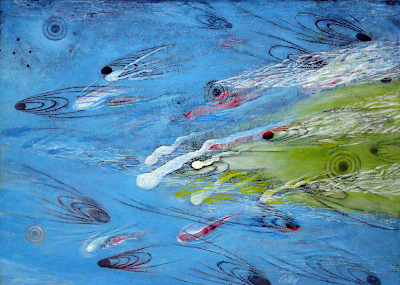 Bill Colby at The Brick House

There's a new gallery in town, and it's pretty cool. It's called The Brick House and it's in an old brick house on Fawcett between 11th and 13th. I had a hard time finding it because the only sign is neon and hanging in the window - not visible from the street in daylight. But it's the only brick house in that block.

The gallery is owned and operated by Peter MacDonald, and it opened recently with a delightful show called Whimsy, featuring humorous works by some 27 artists. MacDonald said he asked the artists to submit works that were whimsical. It included some delightful pieces by Julie Alland, Mike Corcoran, Judy Gilbert, Lynn Di Nino and others.

With the same kind of open-ended approach, the show The Brick House has planned for June and July will be called Naked, and will consist of whatever the invited artists think might fit with that show title. In between these intriguing group shows is sandwiched an exhibition (through May) by printmaker Bill Colby, who is practically an institution in Tacoma.

If you haven't seen Colby's work, you haven't been paying attention. He was a longtime professor of art at University of Puget Sound and has been showing his work in the Tacoma area for as long as I can remember - most recently in a number of group shows at the now (sadly) defunct Grand Impromptu Gallery.

Colby is a master of print media who works in intaglio, woodcuts and other media, often combining print media with watercolor and acrylic and typically using the natural grain of the wood in his woodcuts to create movement of water or other natural elements. Nature is his constant subject. More specifically, as the title of his show implies, The Spirit of Nature. He doesn't just imitate or depict trees and clouds and water; he captures the feel and essence of nature. His prints are grounded in the color and atmosphere of the clouds, water, trees and mountains of the Pacific Northwest.

I counted 27 prints in this show. Most are either mountain scenery with a lot of evergreen trees or images of water and sea life. In many, similar motifs are repeated as abstract patterns. There's a kind of stalk with pods that look like sea shells, for instance, that shows up in many variations; it marches across the surface of his prints like the blue poles in Jackson Pollack's painting of the same name. It's an effective design element.

The best of his works in this show are in a series of woodcut and acrylic underwater scenes with fast moving schools of minnows or tadpoles. These prints - "Skyward: Razzle Dazzle II," "Beguiled," and "Skyward: Glowing" - work well because the images and the abstract structure bounce off one another like jazz improvisation. They're the best examples of how he uses the natural wood grain to create a sense of movement. Everyone has seen how a fast-moving school of fish will suddenly reverse direction. That's what's pictured here, that movement and sparkle.

For people who are really into studying details of media and technique, it is interesting to see how Colby varies similar motifs in different media.

It's good to see another new gallery in town, and I hope everyone will support them.

As of this posting images from Whimsy were still posted on the Web site, so if you missed that show you can still see it online.


"Alec Clayton writes about the arts with the guts of a novelist, the eye of an artist and the precision of a journalist. Not surprising, since he is all three. Clayton knows art from the inside out!" - Lisa Konoshita, Mineral

Read my review column "Visual Edge" every week in the Weekly Volcano. Up next: outsider artist Tyrone Patkoski at Tacoma Art Supply.
Posted by Alec Clayton at 8:22 AM