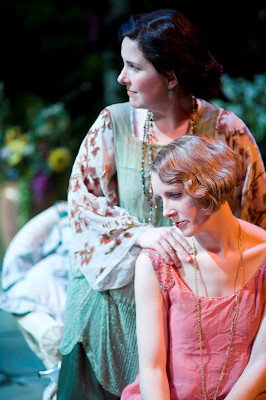 “Enchanted April” at Centerstage in Federal Way is a thoroughly charming romantic comedy based on the 1921 novel by Elizabeth von Arnim, written for the stage by Matthew Barber, and set in England and Italy shortly after World War I. The title refers to both meanings of the word “enchanted” – to be charmed and to have a magic spell cast.

Lotty Wilton (Eva Doak) is a woman trapped in a dreary life with a husband named Mellersh (played by Doak’s real life husband, Dean Wilson). Mellersh is a stuffy lawyer who is at best unresponsive to his wife. Hemmed in by him and by a cold and rainy London spring, Lotty dreams of a better life. When she spots an advertisement for a castle for rent on the sunny Mediterranean coast of Italy, she decides on a whim to answer the ad and go there for a monthlong holiday. But she can’t go alone, and she certainly doesn’t want to take her husband along, so she recruits three other women to join her. The four English ladies have little in common other than dissatisfaction with their current lives.

Like Lotty, Rose Arnott (Caitlin Frances) is trapped in a loveless marriage with a successful writer, Frederick (Daniel Wood).

As unsatisfying as their marriages are, Lotty and Rose consider themselves grateful to have husbands at a time when so many women have lost husbands in the war.

The other women are Lady Caroline Bramble (Hilary Heinz) a young beauty who leads a scandalously modern life, and Mrs. Graves (Rosalie Hilburn), an imperious and disdainful dowager with a penchant for name-dropping, bragging that she was in pigtails when her father was a friend of Tennyson.

The cast is rounded out by Jamie Pederson as the young artist who owns the castle and charms all the women, and Walayn Sharples as the very emotional cook, Costanza, who speaks only in Italian.

The first act strains to be funny against dull and dreary sets and characters with equally dull and dreary lives. It takes a lot of snappy dialogue and good acting to depict such dull lives without being dull, and this performance pulls that off. They milk laughter out of depression. Even the most horrendous moment, when Lotty and Rose are having second thoughts and drop to their knees in fearful prayer, is hilarious.

Sets and lighting by Greg Heinzle of Seattle Scenic Studios are crucial in setting the mood and the theme of enchantment. The first act set is a simple table and two chairs representing Rose’s home and a bench representing Lotty’s home (both doubling as the ladies club where they meet and the bench doubling as seating on a train), and all set starkly in front of a black curtain. Intermittent thunder introduces scene changes.

When the lights come up for the second act there is a gasp of astonishment from the audience as the dreary stage has been transformed into the beautiful sunlit courtyard of the castle in Italy, strewn with flowers, with realistic castle walls and a painted backdrop of vineyards, all bathed in rose-tinted lighting. From this point forward we see the women become transformed. Rose and Lotty find joy in each other but miss their husbands. Lady Caroline lets her guard down and opens up about a personal tragedy she has kept secret, and the nasty old dame Mrs. Graves becomes perfectly charming. The chirping of birds replaces the clap of thunder, and a few almost Shakespearean comic twists ensue when the husbands arrive. What has been a comedy of manners becomes almost farcical.

“Enchanted April” is light and romantic but with some heavier themes including the beginnings of feminism, the awakening of repressed emotion and the devastation of war.