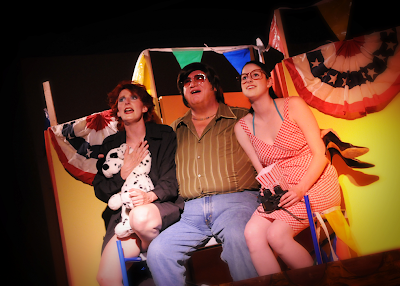 
I really enjoyed the first act of “The Miss Firecracker Contest” at Paradise Theatre in Gig Harbor. Director Jeff Richards’ set, the costumes by Vicki Richards and the cast were outstanding. The principal actors nailed the quirkiness and the Southern accents of their eccentric characters.

In the second act the weirdness and all of the shouting over one another became a bit too much. They seemed to be trying too hard for laughs, a fault that can be attributed as much to the writer as to the director and the cast. Two new characters were thrown into the mix who added to the silliness but contributed little to the story. Fortunately, the problems in act two were wiped away by the closing scene, which was sweet and tender and fully human.

Beth Henley wrote this play shortly after penning her Pulitzer Prize-winner, “Crimes of the Heart,” and her comic genius is clearly evident in bits and pieces – and in her deliciously coined phrases such as Delmount’s oft-repeated expletive “Lord in butter.”

However, it lacks the humanity of “Crimes of the Heart” and few of the characters are as rich and fully developed. The one exception is Delmount (Micheal Carr). Slovenly and loud, with Roy Orbison hair and glasses, Delmount is the epitome of Southern trailer trash, and yet as real and as believable as any character in the play. He has a checkered past, has spent time in jail and in a mental institution, has an obsession with classic beauty, and experiences recurring nightmares about disembodied parts of women’s bodies. He is clearly sick and tortured, but has the sweetest soul imaginable. Carr brings him to life on the stage with both broad gestures (his explosive anger at Elain) and subtle movements (his shy shuffle when wooing Popeye).

The other well-rounded character is Elain (Donna Long), the rich cousin who feels trapped with a husband and two sons she can’t stand. Long plays this character so naturally that you have to remind yourself that she’s acting and is probably much more likable in real life.

The main character, Carnelle (Cynthia Fischer), is a caricature of a small-town beauty contestant with high hopes and not much talent. It takes talent to play talentlessness, and Fischer does it well. Her tap dance routine in the opening scene starts the show off with a boom, and the way she frantically flutters around the room is precious. Also, her hair is great. Delmount asks if it’s a wig, and Carnelle replies that it is dyed. From the audience you can’t tell which it is – or if it’s Fischer’s natural hair. Whichever it is, it’s beautiful and quite malleable – it turns frightful when she teases it before the contest.

The other outstanding character is Popeye (played with great wide-eyed innocence by Annette Renie). Her sweetness is palatable and believable, even if some of her eccentricities are too absurd even for one of Henley’s Southern Gothic creatures. Popeye had put ear drops in her eyes by mistake and they made her eyes pop out (thus her nickname), and now she can hear through her eyes. Surely that is taking absurdity a step too far. On the other hand, learning how to sew when she was a little girl by making little suits for frogs was a brilliant bit of invention.

The other two characters are Mac Sam (Jon Elston) and Tessy Mahoney (Chelsea Carothers). Mac Sam is oily and detestable and played just that way by Elston, and Tessy is stupid and obnoxious, and her constant whistle-blowing is irritating at best. I don’t fault the acting of Elston and Carothers, but I think these characters hurt the play more than they help it.

One final note: Since I last visited Paradise Theatre, the auditorium has been completely remodeled and is quite beautiful now, with three rows of flat seating up front that can be set up with tables for cabaret or dinner theater, and stadium seating farther back.

I advise asking for either front-row tickets or seats in the upper section, because the three rows in the lower section are on a flat floor, so second- and third-row seats still present the problem of seeing past people in front.