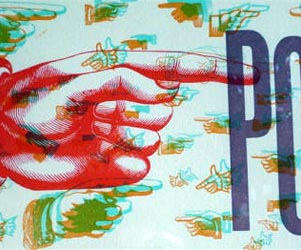 Do I detect a trend, or is it mere coincidence that for two months in a row a.o.c. gallery has featured four women artists?

The last time it was a quartet of fiber artists. This time it’s printmakers. Good ones, too.

The best in this show are Klara Glosova and Betsy Best-Spadero. As for the other two, Janet Marcavage is an artist whose work seldom fails to fascinate but is not up to her previous level of excellence here. In this show, she presents works from a series she calls “Molecular Portraits.” They are figures and silhouetted portrait heads done in lithography, relief and intaglio embossing. There are five figures done with white-on-white intaglio and fields of dots to give color to the flesh (looking a lot like Australian dot painting) and a series of four silhouette heads facing expanses of space filled with intricate dot patterns (which look like writing in Braille but with no spaces between words).

The fourth artist, Spring, is showing a number of prints that incorporate drawing and collage techniques with old-style letterpress type and found imagery. In addition, she’s showing a few small sculptural items. Among the more fascinating items are some tiny vintage photographs framed side by side with snatches of poetry in old light-switch wall plates.

Best-Spadero’s prints are decorative and narrative, and they hint at symbolic meanings that could perhaps be interpreted in a number of ways. In a printed statement, the artist speaks of her work reflecting the everyday experiences of a “stay-at-home mom living in the suburbs.” One group of prints depicts swimmers in black bathing suits awash in green water. Scanning picture-to-picture, the swimmers seem to be tossed about by the waves.

Gallery owner C.J. Swanson said they symbolize the struggle to keep a marriage afloat. That’s an interesting concept, but I had to be told; the message was not successfully transmitted visually. Visually, what these prints consist of are single, flat figures in old-fashioned black bathing suits more or less centered on a green background. They sorely lack visual interest.

Much more fascinating is her series of figures playing ball on diamond-patterned backgrounds. Each print in this series shows a man and a woman playing with a ball. They wear black leotards with striped tops (he) and leggings (she) and kick and toss the ball back and forth in a kind of adagio dance. Various symbolic objects frame the figures trellislike. In one picture, the figures are shot with arrows. The game they play is the game of life, and it is a game fraught with peril.

Glosova is showing a group of solar-plate prints taken from her many sketchbooks. She has filled many a sketchbook with drawings of strange and mysterious figures, many of which she says come from dreams. She scans the drawings and prints them with a process similar to photographic development but using exposure to sunlight on the printing plates. The resulting images are “drawings” with a tonal richness that probably far exceeds the richness of her black-and-white drawings. I say “probably” because I haven’t seen the original drawings, but I know that ink drawings seldom have such velvety blacks.

When scanning her pages of drawings, she opens her sketchbooks to facing pages and scans them to include the spiral binding between the pages and often includes a blank facing page, and in many of her prints, she includes large areas of solid color in a kind of face-off between dense figures and open spaces.

She says that the image of the spiral binding “whether interpreted literally or symbolically … holds together visual ideas, exposing their relationships and allowing for their interactions.”

Glosova’s prints are strangely ominous and utterly fascinating.
There are a lot of small works of art in this show. Take your time and study each piece carefully.