TMP presents its ‘Beast’ with beauty 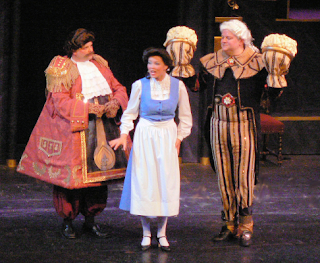 Disney’s “Beauty and the Beast” at Tacoma Musical Playhouse is simply fabulous. In every way imaginable. If there are readers who think area community theaters are not capable of doing justice to a big, Broadway-style musical extravaganza, then I highly recommend that those readers see this performance.

And get your tickets early, because they’re going fast. I went on opening weekend, and the house was packed.

What makes this show so special is not any one thing. It’s not the star quality of any one or two actors or any particular musical number, but the overall production. It is Judy Cullen’s fabulous sets, Joan Schlegel’s lavish costume designs, John Chenault’s magical lighting, Jon Douglas Rake’s direction and choreography, the orchestra directed by Jeffrey Stvrtecky and the staging of the entire production. It is big, it is elaborate, and the visuals are stunning – especially the rich color choices in the painted backdrops and the castle of the beast.

And, of course, there is the heart-rending, ugly-duckling morality story told in traditional Disney style. (You can mock it for its naiveté, but it’s hard not to be touched by it.)

A magic spell has been cast on a prince, turning him into a hideous beast. He lives in a secluded castle in the woods, where all of his friends and servants are being gradually transformed into inanimate objects. The Beast has been given an enchanted rose that is slowly dying, and the only way he can break the spell and become a man again is to learn to love someone and get that someone to fall in love with him before the rose dies.

Beauty – a young woman named Belle – falls into the Beast’s trap when she tries to rescue her father, whom the beast has imprisoned. She offers to take his place in the Beast’s prison if he will let her father go. But her prison is no dungeon with bars; she is given free rein in the Beast’s castle. Gradually, as the Beast softens, Beauty sees beneath his surface appearance to his heart. They fall in love, and the spell is broken.

Elise Campello and Haley Meier alternate in the role of Belle. On the night I saw it, Meier was playing the part. She is a tall and beautiful young woman, perfectly cast for the role. She plays Belle with restraint and dignity and sings beautifully with a high, clear and sweet voice.

The Beast is played by Mark Rake-Marona, a longtime regular on the TMP stage. He also plays his part with restraint. His only means of expressing emotion is through posture and subtle physical gestures, because he is so heavily made up and costumed that the audience can barely see his face. Despite these restraints, he is easily able to convey subtle changes of emotion, from anger to hopelessness to tentative hope and, finally, joy.

Also perfectly cast is Dave Jones as Gaston, the large, arrogant man who has decided that Belle must be his bride. Not only is Jones tall, muscular and handsome enough for the part, but also he has a wonderful voice, and he strikes comic poses with great style. One of the great comic scenes is when Gaston proposes to Belle and sings “Me,” an anthem to self-love from a man with muscles for brains.

The other great comic scene comes in the great big musical number “Be Our Guest” sung by Lumiere (Chris Serface as a man who is turning into a pair of torches) and a cast of anthropomorphic creatures including Mrs. Potts (Diane Bozzo as a woman-teapot with a rich, resounding voice), Cogsworth (a human clock played by Lucas Blum), a chorus of dancing spoons and forks, an acrobatic carpet (Ally Pepin), and a line of cancan dancers with Statue-of-Liberty crowns.

Serface gives Lumiere a marvelously comic French accent that sounds like a cross between Maurice Chevalier and Redd Foxx. Of all the comic actors in this play, Serface is by far the funniest.

It is a long play, running almost three hours, including the intermission. There were some minor technical problems on the night I attended. But none of that mattered, because the play was such a magical experience.