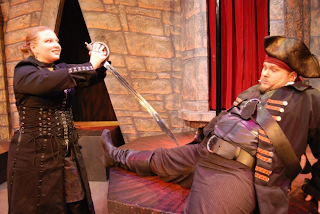 Published in The News Tribune, July 6, 2007
pictured: Heather McMahon as Kat and Chris Cantrell as Petruchio
photo by Michael Christopher
The Taming of the Shrew" is one of William Shakespeare's most reviled plays – hated by many for what is considered to be a misogynistic theme. Depending on which version is chosen and how the director chooses to present it, "Shrew" generally carries the message that women are the property of men and should be docile and obedient.

But Theater Artists Olympia has never shied away from controversy. This is the same company that last summer presented Shakespeare's other often-loathed play, "The Merchant of Venice" – a play that is generally accused of being anti-Semitic.

Director Pug Bujeaud tackles the feminist issues head-on, stating in her director's notes: "I have seen productions of this show that have ended Kate's final and often vilified speech with a great big wink to the audience. I feel strongly that is a cop-out. … She is not simply speaking about a wife's duty to her husband so much as what honor and duty is owed to a relationship to keep love thriving, regardless of sex."

TAO's version of the play takes place in Hades. Kate is stuck in hell. Her father is the devil, and her sister, Bianca, is a bawdy blonde. Petruchio and his servant Grumio are pirates; Lucentio, one of Bianca's many suitors, wears a Superman costume; Biondello, a servant (usually played by a boy but played here by Christina Collins), is a clown; and Hades is sexualized to comic extremes by pole dancers and dominatrixes.

The plot is ludicrous even for Shakespeare. Three men are competing for the hand in marriage of Bianca, but Bianca's father says that no one can marry her until after he marries off his older daughter, Kate, a spiteful shrew no man is willing to marry – no man, that is, until the egotistical and blustery Petruchio comes along. He is willing to marry her for her substantial dowry, no matter how spiteful she may be. Besides, he is confident that he can tame the shrew.

In an absurd subplot that only the master of mistaken identity could cook up, Lucentio pretends to be Bianca's classics instructor and Hortensio, another suitor, pretends to be her music instructor – both in attempts to woo her.

This production is earsplitting. Everybody shouts. The physical comedy is extreme. The fight scenes are intense if not downright dangerous, and it is as bawdy as any play I've seen lately.

The cast is practically a who's who of South Sound theater.

Chris Cantrell is perfectly cast as Petruchio. He is big and boisterous and has a commanding presence on stage.

Scott C. Brown is terrific as Hortensio, as he seamlessly slips in and out of a variety of personas. (I did, however, have difficulty understanding him when he put on a Scottish brogue.) Tim Goebel as Lucentio and Robert McConkey as Tranio are also good.

But the real scene-stealer every time she is on stage is Ingrid Pharris as Bianca. She acts incredibly dumb with a constant look of wide-eyed, drop-jawed incredulity, which she combines with raw sexuality – qualities inferred by gesture and expression that are diametrically opposed to Bianca's sweet and compliant demeanor.

This is not one of Shakespeare's best comedies, but this performance puts a fresh spin on it that is highly entertaining.

It is not recommended for children, and it is a little long at 21/2 hours, which includes a 15-minute intermission.

WHEN: 8 p.m. Fridays and Saturdays and July 8, 2 p.m. Sundays through July 15
WHERE: South Puget Sound Community College, Minneart Center for the Arts
TICKETS: $12 online at www.buyolympia.com/events or at the door
INFORMATION: 360-357-3471
Posted by Alec Clayton at 7:34 AM