[title of show] at SPSCC 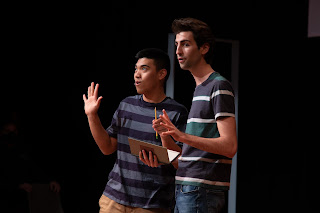 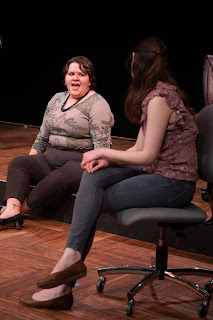 [title of show]— yes, that’s the title of the show, brackets, lower case type and all. It’s a musical about how a musical became an Internet sensation and ultimately . . . careful here, I’m giving away too much . . . suffice it to say it is a show about the writing and production of itself. This show has won an Obie Award and was nominated for a Tony Award for Best Book of a Musical.

Two young unknown writers, Jeff Bowen (Chris Bolduc) and Hunter Bell (Charlie Kuvangasan) challenge themselves to write a play and enter it into New York’s Musical Theatre Festival. The submission deadline is a mere three weeks away. It is clearly an impossible challenge for a pair of unknown and fairly inexperienced writers, which they express along with their hopes and dreams in the song "Two Nobodies In New York."

With the help of two actress friends, Heidi (Jesse Morrow) and Susan (Giselle Jensen) they write the story and songs, singing and dancing and dealing with their personal joys and fears along the way. When they feel down, unworthy and defeated, Susan encourages them to keep going and “kill their vampires,” an uplifting song that is worthy of a big Broadway production number thanks to video projections and great dance moves.

The story arc is typical of shows about the entertainment industry: a rise from nowhere, personal conflicts and doubts, and ultimate joy. There are hints at romance and same-sex attractions, but these are kept at a minimum. Ultimately, [title of show] is a feel-good show filled with music, physical comedy that verges on slapstick, and clever lines delivered with pizazz by the young cast. It’s like a lightweight “A Chorus Line” or “Tik, Tik, Boom.”

Half the cast, Bolduc and Morrow, are experienced community theater actors, and half are SPSCC students who each also have experience, and it shows. They, each and every one, dive into this performance with enthusiasm, great moves and excellent singing.

The direction by Lauren Love is outstanding, and choreographer Nicholas Main deserves kudos aplenty. The keyboard accompaniment was played with style by Kyndal Meister; and a fifth character, Dr. John Guarente as Larry, was in a small supporting role which worked well with the others in the cast.

Love wrote in a program note: “It sings to the ‘showmo’ in all of us; it venerates our nerdiest fantasies; it celebrates our adoration of this glitzy, gritty, glamorous North American form of theatre through the rose colored and sometimes lovingly critical glasses of the queer community. It inspires us to dream of a life where what we know, what we love, and who we love are valued.”

Her statement sums it up beautifully, although it implies a much greater emphasis on queerness than is in the show.