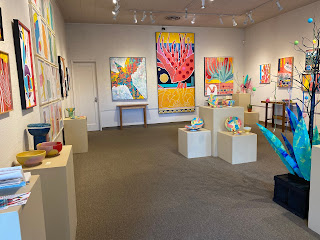 In the early-to-mid 20th century, commercial art and comic art were considered something less than fine art. And then along came Andy Warhol with his soup cans and multiple celebrity portraits and Roy Lichtenstein with his blown-up comic strip images and the surrealistic comic art of the Chicago School, a.k.a. the Hairy Who. The border between so-called fine art and comics and advertisements vanished, and many people didn’t know what to take seriously and what to ridicule. As the song says, “Anything Goes.”

There are elements of all these approaches to art in Sara Gettys’ exhibition “Warmer Days” at Childhood’s End Gallery. In the front window hangs the massive “Exuberance,” a painting in acrylic on wood of two black bunnies boxing. The exuberant flair of this painting will hopefully draw many pedestrians and motorists into the gallery where they will find almost a hundred works of art by Getty, including paintings and porcelain/mixed media sculptures — all colorful, playful, and exciting. Yet, as playful and cartoonish as they are, this is serious art.

Her images are mostly of rabbits with a few horses and birds and flowers thrown in. Her sculptures include bowls, plates, and flowerpots with fantasy flowers that stand alone or hang on walls. Edges of shapes in her paintings are generally hard, but the paint application within shapes varies from smoothly to roughly brushed with interior patterns of dots or stripes, and large swaths of color. In other words, the rabbits and birds and flowers appear on first look to be flat cut-out shapes adhered to canvas or wood with all the painting being patterns and shapes within them.

“Hare” is a large red and pink head of a rabbit with overlapping areas of color and a dot pattern outside the image on a ground that appears to be behind the rabbit in places and to overlap the rabbit in other places.

“Rabbit 1-16” is a stacked series of 16 paintings with paper, ink, and thread with large areas of loosely brushed red, blue, turquoise, and orange with line drawings of rabbit heads that weave in and out.

“After Everything We’ve Been Through” pictures the silhouette of a bird soaring from bottom right to upper left with inside the silhouette expressively painted areas of yellow, orange and blue.

“Big Agave” dominates the back wall of the gallery going almost floor to ceiling. It pictures a stylize red agave plant above a line drawing in white and blue of three rabbits.

“Dream Rabbit in Moonlight” is a black porcelain rabbit imprisoned by what appears to be bands of gold duct tape. It is a morbid image among so many playful images.

Overall, this is an impressive show and a bright welcome to the warmth of spring after a long and depressive winter and fall. In a statement on the gallery website, Gettys said "Warmer Days is a project I started as a way to push back on the chill dreary days of our PNW winter and the anxiety and uncertainty of the past two years of the COVID-19 pandemic."

On Dec 6th, 2021, the Cultural Key to the City was awarded by Mayor Selby to Childhood’s End owners, Bill and Richenda Richardson, followed by the Business of the Year award from the Olympia Downtown Alliance